SIMENON SIMENON. NO NEED FOR A COHERENT CHRONOLOGY 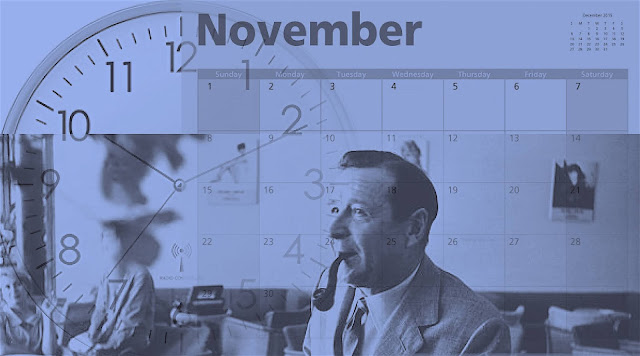 In the Maigret saga, Simenon never bothered about following a coherent chronology, but he let himself being carried by the inspiration of the moment.
In February 1931, when the novelist introduced the Maigret series in the cabaret La Boule Blanche, he made it with two titles written before: Monsieur Gallet, décédé (summer 1930) and Le Pendu de Saint-Pholien (winter 1930-1931). In these first two Maigret novels published, the Chief Inspector is already in full career and well installed in the Quai des Orfèvres, fully in his prerogatives, holder of the investigation, and working with his subordinates.
In 1933, when Simenon thought he was over with the first nineteen novels written for Fayard, he finished the series by sending his Chief Inspector in retirement and letting him be a gardener.
Maigret’s first investigation is told in a novel written in 1948; in this novel, Simenon showed a young Maigret who was not yet a Chief Inspector, but only a secretary in a district police station, and who could enter the Quai des Orfèvres only after the case had been resolved.
In the last written novel, Maigret et Monsieur Charles (1972), the Chief Inspector was proposed to advance in rank and to move from Divisional Commissioner to Director of the Judicial Police, at a time when he was three years away from his long-awaited retirement. While in the meantime, that is to say in some previous novels and short stories, Simenon introduced Maigret as an ex-Chief Inspector, already retired in his little house in Meung-sur-Loire.
Why didn’t the novelist follow a straightforward chronology? First we can remember that Simenon’s intention was to stop the Maigret series after the 19 novels published by Fayard, to move on to the “romans-durs”. A kind of parenthesis that would be used as a springboard to launch into literature “tout court”. Yet after a few years he was convinced, or his desire had returned, to write other investigations for Maigret. Maybe then he had the feeling that this would be a cohabitation for a lifetime.
Simenon, like other detective stories writers (see Arthur Conan Doyle with Sherlock Holmes), tried after some times, to shake off that character who was so successful that his author was identified with the created hero. In reality, from Holmes up to Maigret, but also to others (let’s think for example about Rex Stout’s Nero Wolfe), they instead inevitably follow their creator until his disappearance.
Another point is that Simenon claimed many times that writing a Maigret novel was a kind of relaxation between two “romans durs”. Concentration, the hard creative trance and the intense effort in writing quickly, needed a counterpart, thus the Maigret novels, which Simenon composed in a more relaxed, almost amused way, and without the tension of the “romans durs”. This could imply a freer writing, looser and consequently less in need of a rigorous chronology.
Maigret’s last investigation had seemed to be the one published in 1934 (simply entitled Maigret), when the series appeared to end. And on the contrary the last enquiry (from a literary chronological point of view) was Maigret et Monsieur Charles, written in 1962, which ironically Simenon didn’t know that it would be the last, because he didn’t know that his “état de roman” would vanish some months later. Thus, Maigret et Monsieur Charles was the last novel he wrote, but this investigation was not, as Maigret had been, the conclusion of a cycle.
by Simenon-Simenon
Pubblicato da Maurizio Testa a 13:11