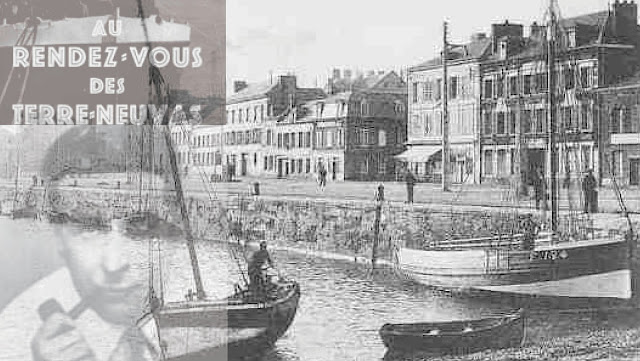 Au Rendez-Vous des Terre-Neuvas, published in 1931, is the best-known of Simenon’s Fécamp narratives. The novel offers the most complete overview of the author’s response to his experiences in the town in 1928-1929 as well as marking a number of steps in the evolution of the character of Maigret and Simenon’s literary development.
Accompanied by his wife, the commissaire travels to Fécamp in response to an appeal from a schoolfriend, now himself a schoolteacher, one of whose former pupils, Pierre Le Clinche, has been arrested under suspicion of having killed the captain of the trawler on which he worked on its return to port. In the course of his unofficial inquiry, Maigret encounters several crew members, Le Clinche’s fiancée and Adèle, a young woman with something to hide. Maigret immerses himself in the atmosphere of the Au Rendez-Vous des Terre-Neuvas, a bar frequented by fishermen, as well as visiting the trawler, the Océan, in his search to discover who had the means, the motive and the opportunity to have killed captain Fallut. The commissaire establishes Le Clinche’s innocence but on uncovering the identity of the killer he decides that no good can come from sharing this information with the local police and the Maigrets return to Paris.
In Au Rendez-Vous des Terre-Neuvas, Simenon develops his narrative by means of a series of contrasts, for example between the owner and the crew of the Océan and Le Clinche’s respectable fiancée and the scarlet woman Adèle, and this technique is also seen in the presentation of the town of Fécamp. Indeed, the names of the two locations between which Maigret divides his time – the Hôtel de la Plage and Au Rendez-Vous des Terre-Neuvas - throw into relief the town’s twin identity as a place of leisure for some and work for others: ‘[The Maigrets] arrived at the Hôtel de la Plage at five o’clock, and Madame Maigret immediately began rearranging their room to her taste. Then they dined. […] Just opposite, the trawler Océan was moored to the quay near a line of trucks. […] In the harsh light people were moving about unloading the cod, which was passed from hand to hand and piled up in the trucks after being weighed.’
Standing at Maigret’s shoulder, the reader is witness to an industry in transition when P’tit Louis explains that ‘Sailing ships only make one trip, from February to September. But trawlers have time to go twice to the Banks.’ Like any capitalist industry, cod fishing is based on a division of labour with strict hierarchical lines between each social layer. At the top, is the ship owner, whose power and wealth stem from his ownership of the means of production (the trawler with its navigation equipment and nets) and the product of his employees’ labour (the cod caught on the Grand Bank). All that counts is profit and when Maigret questions the owner of the Océan about the death of captain Fallut, his response is unequivocal: ‘What do I think? I think that here’s eight hundred tons of damaged cod. And that if it goes on like this, the boat won’t make a second trip. And it’s not the police who settle up these matters or meet the deficit.’ Next, comes the ship’s captain, manager of a unit of production in the same way as a factory manager; then the specialist technicians, the engineer and radio operator; finally, at the bottom, the sailors, men like P’tit Louis, who ‘work like demons’ but are so brutalised that ‘Once they’re ashore they’re always like this, drinking, shouting, fighting, breaking windows.’
Throughout his work, Simenon displays a strong belief in the importance of boundaries as an element of social stability in which each class plays its “natural” role, so “crossing the line” is an action that risks destabilising the social equilibrium, as in the sexual liaisons of the Countess de Saint-Fiacre (L’Affaire Saint-Fiacre) or the social ascension of the Fécampois ship’s captain Emile Bouet (‘Le bateau d’Emile’). And it is the cross-class dalliance of captain Fallut with Adèle that is the trigger for the disaster that follows - his own death, that of the cabin boy and the threat to the future happiness of Le Clinche and his fiancée.
In terms of Simenon’s literary techniques, Fécamp’s status as a fishing port offers numerous opportunities to add the sense of smell to the various sensory touches that he deploys to create an atmosphere, adding to a palette of colour, sound and movement: ‘The water slapped the sides of the ship, which was imperceptibly getting up steam. […] On the right was a lighthouse. At the end of one jetty was a green light; a red one at the end of the other. The sea was a great black hole which gave out a strong smell.’ Indeed, the sense of smell is critical to the two sides of Fécamp represented in the novel; when Maigret returns to his hotel, his wife remarks ‘You smell of scent…’ and the narrator explains that ‘A little bit of Adèle’s strong perfume must have clung to him. A perfume as common as the blue wine you got at a bistro. For months it had mingled on the trawler with the rank smell of cod.’
In conclusion, Au Rendez-Vous des Terre-Neuvas is a seminal text in the development of the Maigret saga in terms of its integration of plot, character and setting. Simenon draws on his own experiences to paint a lively and realistic portrait of the Normandy coastline and Fécamp finds an artist capable of rendering its multi-facetted daily life accessible to a mass readership through the medium of crime fiction.