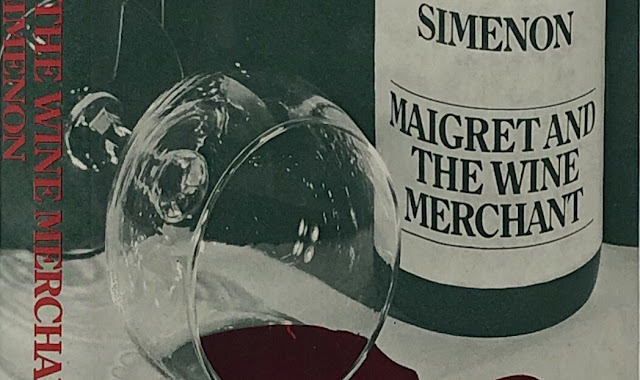 The Chief Inspector’s investigations recounted by Simenon take rarely place in December. Is it because the novelist wanted to give some respite to his hero during Christmas and New Year? The only two December investigations are Maigret and the Wine Merchant and Maigret’s Christmas. Today we’ll talk about the first one.
Maigret and the Wine Merchant begins on December 15. The streets in Paris already smell of Christmas: there are “light garlands from a sidewalk to the other, golden or silver firs, Christmas trees in the displays.” The Chief inspector wonders what he will offer to Mme Maigret, but he has no idea (well, he doesn’t succeed in thinking about it, because he’s got a cold…).
It is cold, wind is blowing, and it is snowing, “tiny snow flakes that were gliding on the pavement like dust”. This meteorological atmosphere forces the Commissioner to put on his heavy black overcoat and a navy blue wool scarf knitted by Louise. But, since his investigation makes him continually roam from the icy streets to overheated houses, of course he gets a big cold, against which Mme Maigret fights with grogs and aspirin.
Having got a cold doesn’t prevent Maigret from savouring at lunch a creamy blanquette at the Brasserie Dauphine, and on the evening a choucroute prepared by his wife. Maybe this is a little too much, and during the night he’s got fever. But on next morning he nevertheless goes out because of his investigation, and he enters a bistro to swallow a few glasses of rum, then he gets back home to eat veal liver à la bourgeoise, drinking Bordeaux wine. After a good nap, here he goes hunting again, after having swallowed an aspirin, with a little glass of prunelle from Alsace. At the end of the day, he still drinks some cognac that he keeps in the cupboard of his office, then he goes home, “his pipe in his mouth, his legs a little wobbly” (well, we can understand that…).
On the next morning, weather has changed, it is less cold, and snow has turned into rain, “a long and monotonous rain that was streaking the window planes.” Maigret is feeling better, he has no more fever and his cold has disappeared. Well, does he need to eat much and drink alcohol to fight against an outbreak of flu? This is a Simenonian prescription that I doubt will be approved by the Faculty of Medicine… The proof is that on next morning Maigret has got fever again, not much, but this makes him feel “lazy and limp”; he drags in the apartment (it's Sunday ...), offers himself another glass of prunelle.
But on Monday his investigation, having had time to simmer, will accelerate: he discovers the track of Pigou, and now he will only need to follow the thread until the end… But it’s not so easy, because Maigret has got fever again, and he begins to have a sore throat; that doesn’t prevent him from drinking beer, and eating skate in black butter for the dinner, yet without any appetite.
The oncoming flu gives him a pretext to grumble, “as whenever he was ill at ease or an investigation was dragging on”. He ends up by going to bed. But he’ll be awakened by Pigou’s arrival, and the man will have time during two chapters to make his pathetic confession, drinking grogs with the Chief Inspector, who, “in the privacy of the apartment, a grog near at hand, looked like a benevolent elder to whom one could tell everything”…