SIMENON SIMENON. THE MAIGRETS IN “THE CELLARS OF THE MAJESTIC” 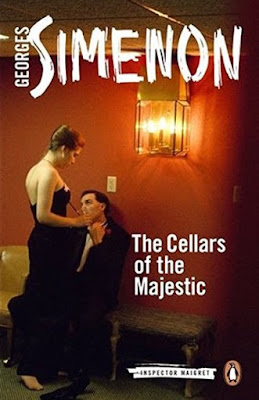 A recent reread of the French original of The Cellars of the Majestic revealed the novel to be a good representative of the Maigret series. An example lies in the portrayal of the Maigret couple’s interaction.
Since David F. Drake’s chronology marries Maigret at 25 and makes him 49 in this novel, one gets a long-term married couple to examine.
That the two typically address one another as “Maigret” and “Madame Maigret” has always intrigued me.
Notably, “Jules” and “Louise” are rarely comes from their mouths, if at all. Indeed, in her thorough piece on the use of first names in the series*, Murielle Wenger indicates “Louise” applied to Madame Maigret appears only in Maigret’s Memoirs. Although he refers to her as “Louise” many times, he only addresses her directly this way one time therein. As for “Jules” applied to Maigret, Wenger does not cite her calling him this at all, and Steve Trussel in his encyclopedic website cites her doing this just once. The exception proves the rule. This point is nicely highlighted in chapter three of The Cellars of the Majestic where Mme Maigret greets her husband at their apartment door as “Monsieur Maigret.” He smiles in response, “not because his wife called him Monsieur Maigret, which used to happen to him often when she was joking around,” but because he is entering the pleasant world of warmth and aromas with his wife sewing in their living room, her feet up on their wood-burning stove. The image establishes a strong sense of conjugal bliss.
Later on, she asks politely: “May I serve you some soup?” and he replies rudely: “Get my dinner jacket ready first.” When she returns with his jacket, he presses on, “You can serve, Madame Maigret.” This short scene shows how she waits on him and he orders her around. In another encounter, he rushes into the apartment all of a sudden, demanding she pack his clothes for a trip: “My suit, quickly… A shirt… Some socks…” He’s frequently tough on her like this, and she usually accepts it. Here, he characteristically ends up laughing at her resulting, unsurprising “bad mood.”
Despite being in a position of near constant subordination, she understands her husband intuitively: “Confess you did it on purpose! I know that look so well. You’d make an angel become unhinged.” She also quickly intuits how he battled with his superior using the “humble, contrite attitude” she is familiar with that “had the tendency to exasperate her.” On his return home from this encounter, she notes a spreading bruise on his chin and jokes: “You’ve been fighting again? And, of course, at the drop of a hat! Where did you get into it?” Smiling broadly, Maigret ignores her light reprimand, for he is pleased with himself for his latest actions.
The Maigrets—in spite of his lack of consideration and seeming indifference—really do care for one another: She’s always nice to him, and he’s sometimes nice to her. While far away on a trip in Cannes, he sends her a basket of bright yellow mimosa flowers. Once, he even puts her ahead of himself. When asked whether he has any children, “he carefully avoided talking about it” because his thoughts are on his wife’s—and not on his own—“great grief” over not having any children.