SIMENON SIMENON. NO NEED FOR CHRONOLOGY?

Why Simenon didn't worry about a chronological description of Maigret's biography 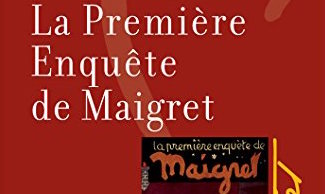 Some years ago, there had been on this blog a discussion about this topic: the chronological order for the writing of the Maigret novels doesn't follow the chronological order of Maigret's life and career. At the time, one of the answers had been proposed in French and Italian, and today we propose an English version, which has been slightly modified and adapted.

One can argue that Maigret isn't the first character for which his creator would first write some events in his life, and afterwards write other novels in which he would tell his infancies or youth, or beginnings in his career, and so on. Maurice Leblanc's Arsène Lupin could be an example for that. But with Simenon, there were other things that came into play.

"One thing that irritated me sometimes was that he was mingling dates, placing at the beginning of my career investigations that had taken place later on, and vice-versa. […] I even intended […] to establish […] a timeline of the main cases I had been involved in. – Why not? Simenon answered to me. That's an excellent idea. Thus we'll be able to correct my books for the next edition. And he added without irony: - But, my old Maigret, you'll have to be kind enough to do the job by yourself, for I never dared to reread myself." (Maigret's Memoirs)

This last sentence is a good illustration of what Simenon's writing is: fast, without backtracking, a minimal correction as a kind of "cleaning up", and, once the book had been published, the author didn't reread it. Which, beside, didn't prevent the fact that, although the novelist asserted that he forgot his characters once the book was finished, he had a rather good memory of what he had written: to be convinced of it, you have only to see the multiple examples of reminiscences from a novel to the other that you can find throughout the Maigret saga.

Thus, if Simenon didn’t reread his books, he had no reason to worry about the internal chronology of them. Moreover, he didn't plan his Maigret novels as a (chrono)logical sequence that had to go over his character's whole life, with a beginning and an ending. He didn't act as Balzac, who wrote his Comédie humaine such in a way that characters would come back from a novel to the other, nor or as Zola, who intended to write the entire story of the Rougon-Macquart family. And we might say that Simenon didn’t really intend to make a saga with the Maigret novels as a whole: it's because there are such many novels that we can speak afterwards of a saga, and it's the long writing period (more that 40 years!) that permitted the character's development.

When Simenon "entered a novel", he wasn't telling himself that his purpose was to write Maigret's next investigation; rather his writing started from an idea, a sensation, a memory, a situation in which he wanted to immerge a character, and at the beginning he wasn't always sure that he was going to write a Maigret or another novel. It's especially true for the Presses de la Cité novels, where we know some novels for which Simenon had in mind to write a roman dur, and then he couldn't "find the right tone", and so he decided to deal with the subject in a Maigret novel. Simenon wrote instinctively, and he didn't build his works according to an architectural project such as Proust did in his Recherche. Even if, of course, he perfectly knew what kind of literature he intended to write.

But Simenon essentially wrote because he really felt the need of writing, an almost physical need to write down his questioning about life. And every time he began to write a new novel, it was not the requirements of a pre-established project that he responded to, but rather an almost vital need to express his feelings...