SIMENON SIMENON. A VISIT AT THE QUAI

About Simenon’s encounter with the policemen of the PJ 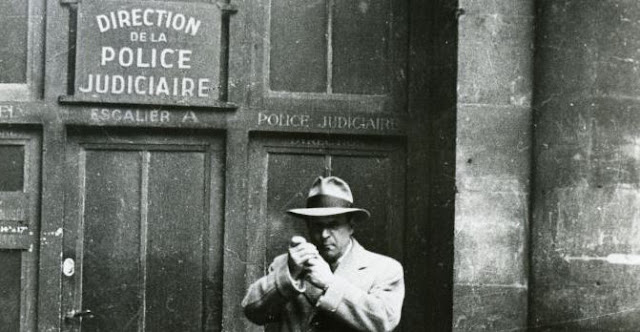 In the period when he wrote popular literature, Simenon used few points of reference, inventing everything, whether being adventure or exotic novels, love stories or detective novels; the most important ingredient was his imagination.
As for detective novels, he could partly rely on his experience as a reporter, which he had had when he was working at the Gazette de Liége and was attending daily to police stations, where maybe he had known an official called Maigret. He had also written a series of articles entitled “Scientific police”, and he had attended doctor Locard’s famous conferences.
Yet in these detective novels of popular literature, there was neither rigor nor exact knowledge of the investigative machine of the police. The protagonists in those novels were generally private or even occasional investigators, who didn’t need to follow the rules and patterns of the state police.
In 1929, Simenon was asked by Fayard to write a series of articles about the functioning of police machine; the articles were published in the newspaper Ric et Rac, with the title La Police scientifique, and were signed J.-K. Charles. Simenon had also read Chief Inspector Macé’s memoirs.
However, he still lacked direct knowledge. And when he began to write the Maigret novels, he felt he needed to gather material, above all about the procedural that a Chief Inspector of the homicide brigade like Maigret should follow.
After the publication of the first Maigret novels, the director of the Judicial Police, the famous Xavier Guichard, who appreciated that at last in these novels the police was not ridiculed by a private detective (as it was the case with Sherlock Holmes, Hercule Poirot or Nero Wolfe), found that there were nevertheless inaccuracies. So he invited Simenon to come to the P.J. to better know the policemen’s true work, so that the novelist could avoid writing inexact things in his novels. Thus the secretary of the director led him in the Palais de Justice, explained how an investigation really unfolded, with which procedural and methods, and which instruments were used. Simenon also met some famous chief inspectors of the Quai des Orfèvres, such as Massu and Guillaume.
After a round of first contact, Simenon asked whether he could attend the interrogations, because these moments showed the human aspect of the crucial encounter between criminals, suspects and policemen, where psychological and behavioural aspects emerged, and this was most interesting for a writer like him.
So, following Chief Inspector Guillaume, he attended the interrogations, the morning report, the meeting of the heads of the various brigades with their director, and even the psychiatric examinations in the special infirmary of the Quai.
In a 1963 interview with Roger Stéphane, Simenon remembered about his Maigret novels: “I took a lot from these ambiences, even if I was constrained to cut off because you can’t write a novel that unfolds like a true police investigation, where 90 to 100 people are implied… you would need to speak about rogatory commissions, about relationship between the different services, it would be so complicated that the readers wouldn’t understand anything…”
In April 1952, Simenon, who had become famous all around the world, as well as Chief Inspector Maigret, came back to the P.J. He was welcomed with all the honours at the 36, Quai des Orfèvres, made famous thanks to him, by the prefect, the chief inspectors, the inspectors, and there was a solemn ceremony of the delivery of a Chief Inspector's medal, numbered 0000, with Maigret’s name.
Later on, Simenon made a keychain with this medal, and one day he used it to avoid a penalty when he had been caught for speeding by the police. Yet Simenon was very proud of this medal, and he even said that he was more proud of it that of any literary honours he could have received…