About similarities between jazz music and Simenon’s way of writing 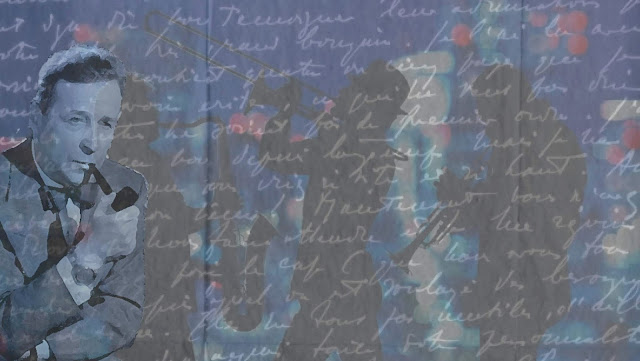 Jazz is music from Black American origins, hybridized by different cultures, contaminated with countless genres, diversified by the evolution of instruments and which evolved in the course of time. And these prerequisites could, in our opinion, have some similarities with Simenon’s works.
At the time of the novelist’s tumultuous love with Josephine Baker, when he hung around the Parisian caves where jazz was at home, Simenon claimed that “what is wonderful with jazz music is that it categorically excludes the notion of centrality typical of any other genre starting with rock and variety music…” Maybe that’s exactly the point. This music, which has, as three fundamental elements, parity between the instruments that play together, release from dominant tonal forms and an unorthodox use of musical instruments, has a lot to do with the method and the practice of Simenon’s writing.
In jazz, improvisation is a moment when an instrument, any instrument, becomes soloist and begins a performance which, from a theme or a harmonic sequence, creates a melody that has points of contact with its origin, but evolves freely, improvising, and the musician himself doesn’t know what he would play in a few seconds or minutes. Of course it will be something he has in mind, but he will combine in an original way and build the solo in that precise moment. This could be paralleled with the way Simenon composed his novels. He started with some names, some sparse data, some inspirations of reference, and then he began to write guided by his “état de roman” (a kind of state of trance) and even he himself didn’t know which paths the story would take and how the events would conclude. We could also say that Simenon was improvising during the drawing up of his novels. He resorted to memories, characters and places he had experienced, which would be combined in a way he could not even had foreseen.
Let’s talk about the parity between the instruments. In classical music for example percussion instruments are almost generally occasional escorts, whereas in jazz music drums are equal to piano, double bass or saxophone. And also in Simenon’s novels we find positive or negatives, good or bad characters, yet each of them has his shadow areas and those of light. In Simenon’s view (and often in Maigret’s), this puts all of them on the same level, without any value judgments nor distinctions, except for those contingencies that history entrusts to the protagonist or to the second-rate characters. But behind each of them there is an equal dignity, whether they may be rich or poor, noble or miserable.
Finally let’s talk about the disrespectful use of classical canons in the way of playing instruments. That’s a revolution that Simenon also puts in place with his “mots-matière”, concrete words, nothing superfluous; he uses terms that indicate tangible and easily identifiable things. Adding this to his short and sometimes even syncopated phrasing, we find a linguistic instrument different enough from the preceding ones, and thus that can be identified as innovative if not revolutionary. A high treatment, and often psychologically deep, but simply and synthetically expressed.
We would like to end with a hint of the atmosphere in some novels, the ones that are quite thrillers and create an atmosphere that could include a jazzy sound commentary. You could think about novels such as Red Lights or Three Beds in Manhattan. As Michel Carly wrote in his book Simenon, la vie d’abord, “Simenon was born at the time of the first telephone connections, with cars of all colours, next to a hotel where illegitimate couples go, to make love while listening to jazz…”