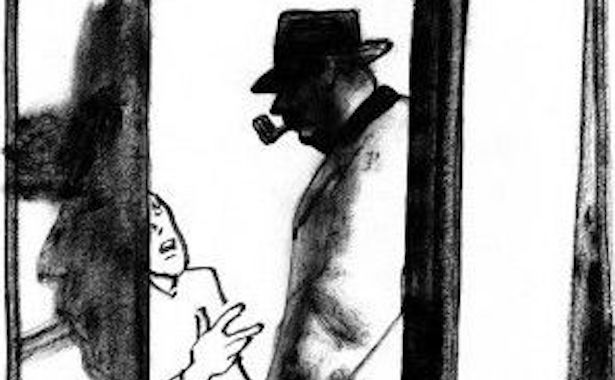 New Statesman - 20/11/2013 - Ian Samson -  Born in Saint-Fiacre par Matignon, deep in the Auvergne, the heart of France, he is around 45, lives in Paris, is married but childless, a pipe smoker, gruff, uncomplicated, the sort of man who likes to relax with a glass of beer and his own thoughts for company. He wears a well-cut suit, a bowler hat and an overcoat with a velvet collar. Greying dark-brown hair, a poorly knotted tie and a taste for good, plain food. Big, broad-shouldered, proletarian, he stands with a boxer’s stance, feet wide apart, forever dependable, immovable and there. He looks like Jean Gabin. Or Rupert Davies. Michael Gambon. Michel Simon. Handsome-strange. Beautiful-ugly.
He is, of course, Jules Amédée François Maigret, the creation of Georges Simenon and one of literature’s most exceptional characters. Or, rather, one of literature’s most unexceptional characters: the most exceptional unexceptional. Most of the great characters in literature are like great “characters” in life – florid, flamboyant, attention-seeking – and many of them clearly suffer from some kind of neurosis, or terrible anxiety, or fatal flaw, kink, twist, weird problem, or secret thwarted ambition or desire, or, indeed, some more severe form of psychiatric disorder. Take, for example, Captain Ahab, Sherlock Holmes, Holden Caulfield, Emma Bovary, Macbeth, Ibsen’s Nora, even little Bertie Wooster. There are few great characters in literature who are undeniably and delightfully dull and yet who also possess true negative capability, who are entirely possessed of themselves. Maigret is the first among very few equals.


He is also one of the few detectives in literature who seem to be possessed of characteristics not shared by their creators. In a sense, G K Chesterton was Father Brown and Agatha Christie was Miss Marple. Dashiell Hammett was a quarter Sam Spade and three-quarters the Continental Op. Yet Simenon was not Maigret; instead, he was almost the exact opposite. Where Simenon was promiscuous, Maigret is uxorious. Where Simenon was self-promoting, Maigret is self-effacing. Where Simenon was swift, Maigret is slow...>>>
Pubblicato da Maurizio Testa a 08:54