SIMENON SIMENON. A DIARY “ON THE ROAD”

About Simenon’s 1946 journey across the USA 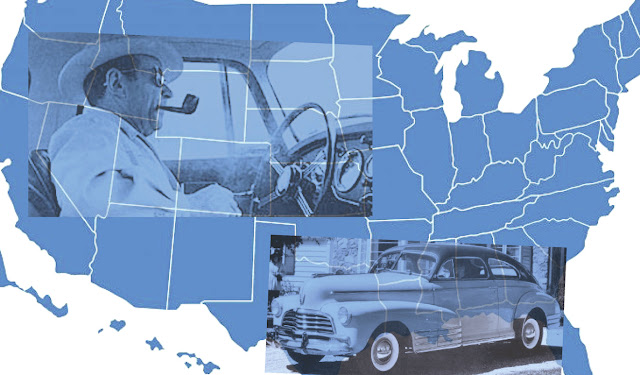 November 5, 1946. The newspaper France-Soir begins the publication of a travel report entitled “Les USA de Monsieur Tout-le-Monde”. It’s the account, in ten episodes, until 22 November, of a journey by car from Maine to Florida, 5000 kilometres across the United States. The author is Georges Simenon. It’s a travel report like many others he wrote during his career, at the time he navigated on the French and European canals with the Ostrogoth, or when he travelled to distant tropical countries.
The spirit of discovery, the desire to know places and habits far from the usual ones, the search for the “naked mankind”, in short, all drives that made him move in all directions. For Simenon there were important experiences, as a background for the novelist, but also because they allowed him to write travel reports for newspapers, a genre of writing that he obviously favoured; from the most modern metropolis, New York, up to the wide spaces, he compared the two opposite sides of the great country.
The articles of “Les USA de Monsieur Tout-le-Monde” were collected in a volume published in 1947 by the Presses de La Cité. Later on it was published again by Le Livre de Poche, under the title “Des phoques aux cocotiers et aux serpents à sonnette”. This book is interesting because you can note that, over half a century later, and despite all the changes that have taken place, Simenon’s way of picking the essence of places, people, the geographical and social context, is nowadays still actual, and you can read with pleasure, even in the eyes of today's savvy travellers, this diary “on the road”.
The interest, you could say, is not a literary one, but it goes upon Simenon’s American experience. This about 5000 kilometres trip began in mid-September 1946. That is to say, less than a year after he had disembarked in New York, in October 1945. After having lived in Canada, he left for this travel, driving an old Chevrolet. Thus this trip was his first real life experience in the United States, and the report was written at the same time, like a travel diary, and published almost daily by France-Soir (5, 6, 7, 8, 10, 14, 15, 17, 20 and 22 November), after the trip was just finished.
For this reason, you have to consider with caution the novelist’s observations and judgements, such as individualism, tolerance, distrust of the state, the Americans as men without nightmares, a society in which everyone has the right to think another way… You must not forget that these are judgements by a man who had just “escaped” from France, and who saw America like a freedom chimera, with an all positive profile, where reigned an unlimited trust in future. After this period of fear and the accusation of collaborationism he had endured, he had a feeling of liberation and the impression to be born again when he succeeded in putting an ocean between the Old and the New Word.
It would be quite interesting to compare the statements we find in this report and the judgements about America and American people that Simenon would give later on in 1954, just before his (new) escape to Europe (themes such as Puritanism, racism, McCarthyism…). These new judgements are based on ten years of life in the USA, and not the ones of a traveller in his first discoveries.
But we could see in a novel like Maigret at the Coroner’s (written in 1949), or in some other novels taking place in America, that Simenon was already beginning to understand that the ideal picture of America had a not so beautiful downside…