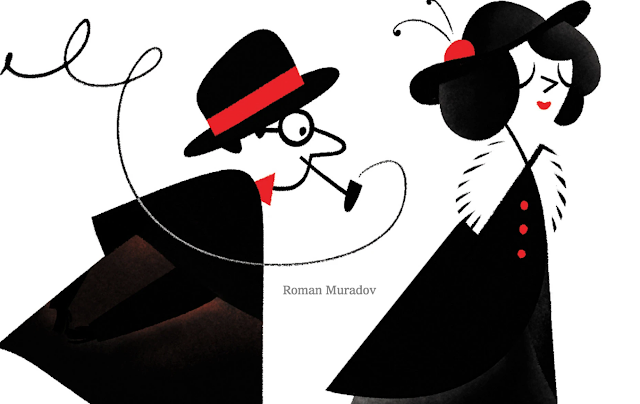 The New York Times - 20/02/2015 - Scott Bradfield - Georges Simenon (1903-89) had, at the very least, two identities. One was the Belgian altar boy who quickly made the transition from failed pastry chef to legendary cub reporter for the Gazette de Liège when he was only 16 and went on to write nearly 200 pulp novels between 1924 and 1931 (he referred to them as his “novels for secretaries”). Then, when he decided to write “good” books, he took the advice of his mentor, Colette — “Get rid of all the literature, and you’ve got it” — and spent the next five decades producing more than 200 serious novels, keeping meticulous accounts of his multitudinous foreign translations and film adaptations, and moving his family from the French countryside to Arizona, New England, Quebec and back to Europe again, even while finding time to enjoy three very French family meals each day, and to walk with his adored children in the local parks.
On the other hand, there was the more notorious author of “Intimate Memoirs” (1981), who happily and widely confirmed that meals were not the only thing he enjoyed three times a day. At one point, he was living with his wife and two mistresses, and still went adventuring off with prostitutes and casual women he met in bars. “I would even say that sex is the only possible form of communication with women,” Simenon once told a friend. It is hard to imagine any author who was more successful in the scope and variety of his “communicating.”...>>>
Pubblicato da Maurizio Testa a 14:24