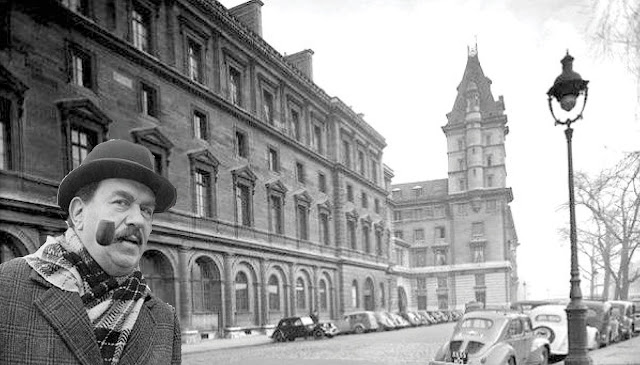 Quai des Orfèvres. A mythical place, especially thanks to Simenon, who wanted his Maigret to work there. Regular readers of his investigations, even without ever having set foot there, can say that they know this place like home, and not only the Chief Inspector’s office, the inspectors’ room, judge Coméliau’s study, the waiting room, Moers’s attic… But also the staircase worn out by the policemen’s and criminals’ soles, the Seine that Maigret can see from his office window, the old coal stove he could keep for some times, and his pipes lined up on the desk, ready to be smoked.
The Quai des Orfèvres is famous, and also famous is the house number, 36, which had been the historical headquarters of the Parisian Judicial Police for hundred years. It’s as famous as Scotland Yard, and both live in the collective imagination. In 2017 the doors of the imposing building on the Ile de la Cité closed over a hundred years of murders stories, human cases, dramas, tragedies, but also triumphs and defeats for the police… and Maigret also belongs to those stories, because he literarily lived during more than forty years in that house that is for him almost the first address, even before that of the 132 boulevard Richard-Lenoir. It’s the address of the office where he spends the days, where he interrogates suspects, where he works late in the evening coordinating his collaborators’ moves scattered around Paris, where he has beer and sandwiches ordered at the Brasserie Dauphine, where he phones to Mme Maigret telling he won’t be back for dinner or even for all night, where he has his “other family”, that is to say his inspectors Janvier, Lucas, Torrence and Lapointe.
Thus the Quai des Orfèvres closed in 2017, like Les Halles closed in 1969, when the famous food market in the centre of Paris were transferred in Rungis. Pieces of history that are gone away. Les Halles closed almost at the same time when Maigret’s investigations were over (Simenon wrote the last case in 1972).
At this point, we have to underline how the saga of Maigret also fulfils a task that is perhaps little highlighted: that of archiving memory. In that saga we find the twentieth century Paris, in the pages of the more than hundred novels and short stories, in which everyday life is witnessed, the life of common people in the popular districts, which are more likely to disappear, but towards which Simenon fortunately had considerable interest. And thanks to this, but also thanks to his powers of observation and his amazing memory, the city backgrounds in the Chief Inspector’s various investigations create a puzzle that gives back a portrait of a largely vanished Paris, with its brasseries, its bistrots, its little cafes, the zinc counters… but also the concierges, the small workshops of artisans, the barges on the Seine…
Yet the city described in the Maigret novels changes from the thirties to the seventies. With the arrival of television, of traffic jam, news premises, supermarkets, the ritual of the weekend spent outside the city, more and more room for innovation, from household appliance to police investigation techniques.
And Maigret stays there, even if the rules for entering the police have been renovated, investigations methods revolutionized; science and technology are now part of the daily life of the police and judicial machinery. Maigret remains like a symbol, like an icon that symbolizes a period of great appeal of France and Paris in particular.