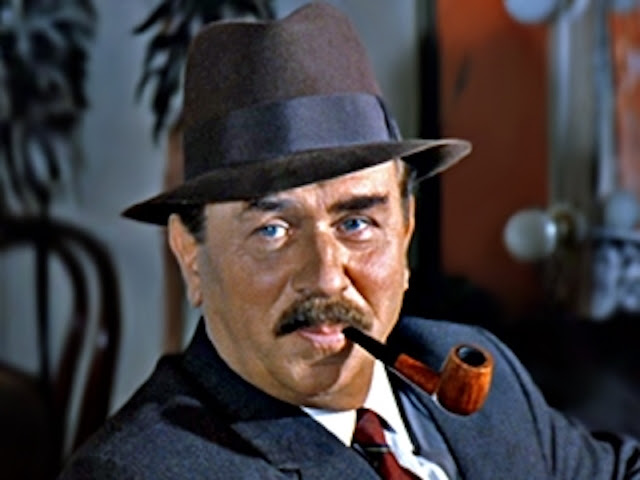 In Italy Maigret has the face of Gino Cervi. At least for those who for age reasons could have watched the series produced by the RAI (Italian television) between the mid 60s and the first 70s. Some could have seen the series re-aired later on, and also various editions in videotape and DVD released by the RAI or other publishers, which encountered notorious success.
Basing upon a 1985 interview by Giulio Nascimebeni, it has been often said that Simenon had claimed that Cervi was the Maigret he preferred. This is not proved. Elsewhere the novelist claimed that the English Rupert Davies was the best non French interpreter. In reality Simenon was not interested in the television adaptation of Maigret’s investigations, nor in the cinematographic productions adapted from his novels. He was not at all satisfied with what he could see, because it was something about what he had created and then someone else dealt with it, more or less arbitrarily, modifying it to his taste and liking.
Cervi was a good theatre actor; he worked in Pirandello’s Compagnia del Teatro d’Arte. He was also a great cinema actor (he acted in about 120 movies), but before becoming Maigret, he had a handicap because he had been the famous communist mayor Peppone in the cinema series Don Camillo with Fernandel. Those films were very popular in Italy and in France too, and for the public Cervi was identified with Peppone, a grumpy country man, sanguine, not very well educated.
In the mid 60s television had started to be a medium in strong competition, and often a winning one, with radio, cinema and theatre. There were millions of TV viewers. Cervi embarked in this adventure, even if not with few guaranties. The director was Mario Landi, the screenplay was made by Diego Fabbri and the delegate at the RAI production was a then unknown Andrea Camilleri.
The series was immediately a big success and with these episodes Cervi almost managed to make himself forget as Peppone, and he was then identified with Chief Inspector Maigret in the collective imagination of millions and millions of Italians. At the point that Mondadori, which published in exclusivity the Maigret novels, commissioned Ferenc Pinter, a great designer, for the book covers, which had Cervi’s features. Televisions sets were installed in the movies rooms when the RAI was broadcasting the Maigret series, so not to loose public in the evenings when peaks of eighteen million spectators were reached.
Why did Cervi get so much success in playing Maigret? Of course we have to mention the actor’s consummate skill, the precise direction, the excellent screenplay and the cast of level actors, almost all from theatrical origin. But there are also other reasons. That is to say some analogies between the character Maigret and the man Gino Cervi. Maigret was born in Saint-Fiacre, a village in the Allier, and young Maigret grew up with outspoken values and simple habits of those that lived at the time in the country side and in contact with nature. Cervi was born in Bologna, but he still had some relationship with countryside and genuine values. Maigret had to stop studying because of necessity and Cervi because he wanted to follow his theatrical passion. In their twenties both began to work, Maigret in the police and Cervi in the theatre. Both had the tendency of being good eaters and drinkers. Yet Cervi was not a pipe smoker before he began to play Maigret; but his way to smoke the pipe appeared very natural, thanks to his talent as an actor.
All this had allowed Cervi to easily enter into Maigret’s character, and he was also helped by a certain confidence with France, since he had worked in many French cinematographic productions and he had made theatrical tours in the country. Moreover his massive figure was physically a mirror of Maigret’s.
Almost forty years after the broadcasting of the last episodes, the DVDs of the series are still successful. Thus we can see that Cervi’s Maigret has become a television classic.