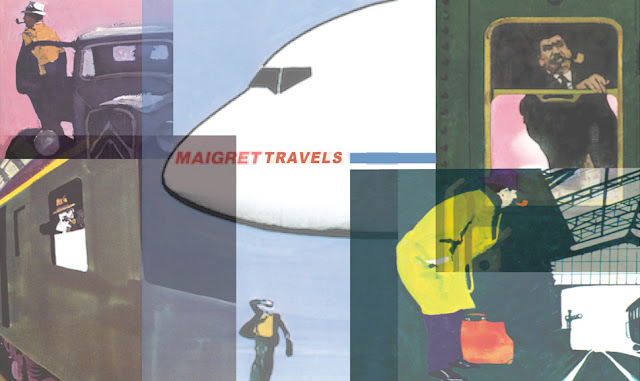 In Maigret voyage (1958) Maigret is preoccupied for the duration of the novel by two Englishmen yet he only meets one of them. How to explain this apparent paradox? Simply, colonel David Ward, an English millionaire, is murdered at the beginning of the story and in order to solve the crime the commissaire attempts to understand the life and character of the victim by interviewing his associates, one of whom is his business confidant and friend John T. Arnold. The action moves from Paris to Monte-Carlo to Lausanne and back to Paris with a cosmopolitan cast of characters which poses the question of the relation between the Englishness national identity of Ward and Arnold and the apparently supranational social environment in which they live.
At first sight, Colonel David Ward bears a strong resemblance in his appearance and behaviour to other upper-class Englishmen Maigret has met in his career. But in other ways, Ward is quite different from Colonel Sir Walter Lampson (Le Charretier de la ‘Providence’) and Major Teddy Bellam (Mon ami Maigret). Lampson and Bellam both issue from the aristocratic wing of the English ruling class, have been professional soldiers in the British Indian army and live as expatriates because they no longer have the financial resources which would allow them to maintain the lifestyle expected of an upper-class Englishman in the land of their birth. In Ward’s case, his wealth and social status comes rather from industry, specifically the family wireworks he has inherited in Manchester, and the title of “colonel” which he uses because of the social cachet it carries comes not from a career of military service but rather from his role in military intelligence during the war. Ward’s decision not to live in England is for reasons of personal preference not financial constraint: ‘He detested Manchester’ and, according to his associate Arnold, was uninterested in the family business, which almost ran itself, to the extent that ‘I don’t suppose he’d spent three nights [in Manchester] in the last thirty years.’
Ward’s choice is rather to divide his time between his apartment in Lausanne, hotel suites in London, Paris and Cannes, which he rents by the year, and visits to other aristocratic resorts such as Biarritz and Deauville. Apart from his friend and business advisor Arnold (yet another whisky-drinking, cigar-smoking Englishmen, possessed of ‘innate self-assurance’), Ward’s social circle is international: his third wife, whose divorce is imminent, is an American, his mistress is the comtesse Palmieri, formerly married to an Italian count (and for some reason named ‘Paverini’ in Jean Stewart’s 1974 English translation) and his other associates include exiled members of different European royal families, a Parisian grande dame and the Belgian chemical magnate Jef Van Meulen, who had been, moreover, the second husband of the countess. Although English appears to be the lingua franca of this cosmopolitan jet-set, plurilingualism seems to be widespread: Arnold speaks French with barely a trace of accent and Van Meulen communicates with Maigret in flawless French.
In short, Maigret finds himself in a social milieu where wealth and social status rather than nationality are the defining characteristics. Although Maigret ‘could understand English at a pinch, but by no means spoke it fluently’, his problem in penetrating Ward’s world has less to do with language than with social class and he has just as much difficulty understanding French-speakers such as monsieur Gilles, the manager of the hôtel George-V, and doctor Frère with his list of illustrious patients: ‘They uttered the same words as everybody else and yet they spoke a different language. When they mentioned “the Countess” or ‘the Colonel”, the words bore a meaning that eluded ordinary mortals.’ Even in his conversation, in French, with the hotel telephonist, at the very outer fringes of this private international upper-class world, Maigret discovers that ‘they didn’t speak the same language here as at the Quai des Orfèvres’. The obstacle to communication is in the connotation of words, the implicit meanings given to them by their speakers, rather than their denotation, their primary literal meaning. This much is recognised by the fluent French-speaking Arnold in the course of his first interview by Maigret: ‘He, too, must be thinking they were not speaking the same language, that they were on different wave-lengths.’
As the commissaire pursues his investigation from the George-V to the Hôtel de Paris in Monte-Carlo and on to the Lausanne-Palace before returning to the George-V, he is struck not only by the physical similarity of the locations but also by the identical lifestyles and social norms of their international clienteles. This is a world in which identity is based not on nationality but rather on wealth, social status, common behaviour and shared attitudes. In his eventual resolution of the case, Maigret discovers that Ward had been murdered by his fellow countryman, Arnold, but that the motives for the crime had no national dimension or origin: rather Arnold had decided in conjunction with his employer’s third wife to kill her husband before their divorce was finalised and Ward could marry the countess, thereby ensuring her inheritance and Arnold’s entry to the world of the super-wealthy in his own right rather than merely as Ward’s associate.
In conclusion, although Maigret voyage presents a vivid portrait of its two central English characters, the theme is one of social class rather than nationality. As in other stories in the Maigret saga, such as Les Caves du Majestic (1942), Simenon draws on his own experience of life amongst the cosmopolitan super-rich to depict the contrast between a world whose snobbery and pretensions he later claimed to dislike, but in which he continued to participate, and the traditional French petit-bourgeois values and lifestyle of his commissaire.