SIMENON SIMENON. THE END AS A NOVELIST

In 1972, Simenon no longer found his creative trance 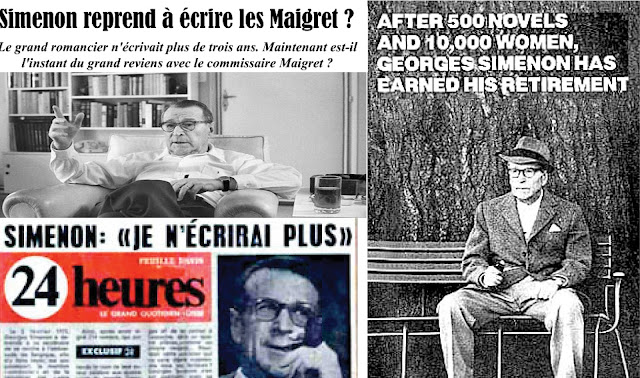 Epalinges. February 11, 1972. On that day, in his private office in the big villa, Simenon was finishing the drawing up of Chief Inspector Maigret's 103rd investigation. The title was Maigret et Monsieur Charles. The novel would be published in July in the same year, by the Presses de la Cité. As Simenon would have said, he was about to “cross the line”, but he didn't know it yet. That date was a fundamental one, that of the end of his career as a novelist.
In fact, a few months after, in September, he made the usual preparatory rites, so to begin the drawing up of a new novel. He already had in mind the protagonist, for whom he had found a name, which would also had been the title of the novel: Victor. But by the end of the day, he hadn't succeeded in writing a single line. Was his creative trance, which he called état de roman, missing ? Was he overtired? Did particular emotional stress affect him? Was there any particular problem that troubled him?
In a way, we could answer that was not the case. The bonds with his wife were now definitely cut off, for Denyse had left eight years before. His mother, with whom he had been in perpetual conflict, had died two years ago. Of course he was concerned with Marie-Jo, who didn't find her way and her mental equilibrium; but this was not a new problem, rather a critical situation of which Simenon was well conscious. And Teresa's presence gave him serenity and security.
The following day he uselessly waited for the déclic that triggered the mechanism, as it had been the case for hundredth of times. But nothing happened. He said to Teresa: «If tomorrow I'm still in that condition, I can tell you that I'll stop writing...» And so it was. The fact is that Simenon didn't even try, at least it seems so, to put it off, for example up to the following week. He didn't think of making a pause for some months and waiting for inspiration to write another novel.
His decision to stop writing was as if dictated by the awareness that his creative trance mechanism would not operate anymore. Why? Simenon didn't' ask himself questions about that, as he hadn't asked for all these years during which he had followed this état de roman that gave him inspiration, that led him to write, that guided him without making him know where the novel would go on. This had been his most spontaneous way of writing for forty years, an instinctive way and, as Simenon often pointed out, honest towards the readers. He only wrote about what he really felt, nothing else, nothing artificial or constructed.
Years after that choice, he explained that if he had wanted too, he could have gone on writing Maigret novels or novels «à la Simenon». After hundredths of times, of course he had experience and the necessary ability to create a work, with themes, style, and typical «simenonian» atmosphere, and maybe nobody would have seen any differences with the preceding novels. But he claimed that it would not have been spontaneous and above all it would not have been fair towards his readers.
Finally, he stopped writing, or rather he stopped writing novels. In fact he began dictating, the so called Dictées, which were recorded on magnetic tapes, and Lettre à ma mère, then he wrote by hand his Mémoires intimes. These autobiographical works are of great interest, but of course they are not novels, as Simenon had accustomed the readers for decades.
On February 1972, he made his typewriter silent. His état de roman became only a memory. Writing, his real reason for living, lost his sense. And this “crossing the line” took place in a global turnaround. He left the big house in Epalinges and settled down in a modest flat at the eighth floor in a building in Lausanne. He gave up his books, his cars, his valuable paintings, his servants. With a few essential belongings he entered a life phase that led him, as he said, to be “un homme comme les autres”, like many of his so many characters in his novels.