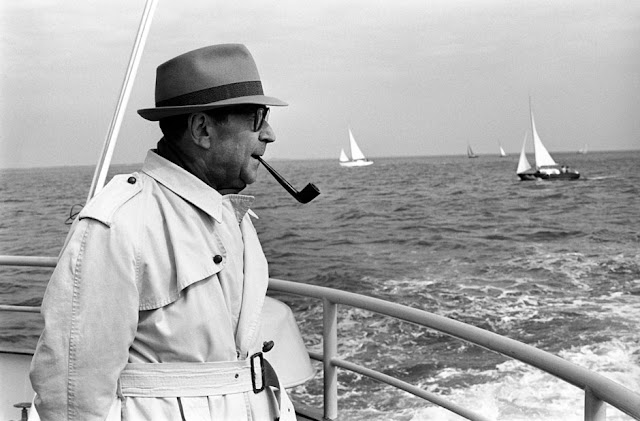 The New York Review of Book - 01/06/2015 - John Banville - In Monsieur Monde Vanishes, one of the finest of what Simenon called his romans durs, or “hard” novels, the eponymous central character, a successful, middle-aged Parisian businessman, simply walks out of his life one day, without a word to anyone, including his wife and family. He takes a train to Marseilles and checks into an anonymous hotel, and next morning wakes from a dream in which he seemed to be weeping copiously and talking to himself:
He was speaking without moving his lips, for which he had no need. He was telling of his infinite aching weariness, which was due not to his journey in a train but to his long journey as a man.
He was ageless now. He could let his lips quiver like a child’s.
“Always, for as long as I can remember, I’ve had to make such efforts . . .”
It is a quintessential Simenon crise, in which a man who has spent his life in servitude to family, work, society, suddenly lays down his burden—“Lord, how tired he was now!”—and determines to live for the moment, and for himself, in full acceptance of the existential peril his decision will expose him to.
Simenon understood well the desperation of Monsieur Monde, and of the many other similar characters he created, in the Maigret crime novels as well as in the romans durs. Simenon was a driven creature, who in his lifetime wrote more than four hundred books, drank and womanized incessantly, and, in his younger days, roamed the world in frantic search of he knew not what...>>>
Pubblicato da Maurizio Testa a 11:02