About the novel Touriste de bananes 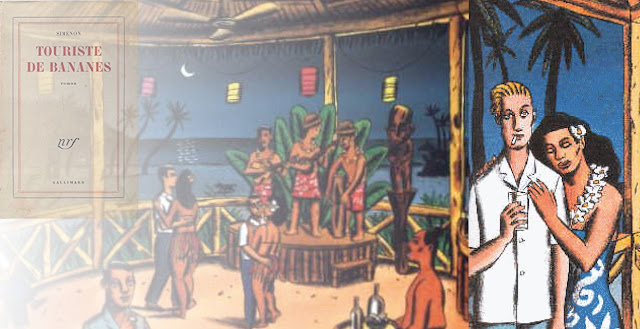 On June 8, 1937 Simenon, who was on the Porquerolles Island, finished writing the novel Touriste de bananes, which was published by Gallimard in July of the following year. The second title of the novel was Les Dimanches de Tahiti. In 1935 Simenon had been in the so-called Wind Island of French Polynesia, where he had stayed for a few months.
This stay would prove prolific since later on he would write some texts about that island, about the native population and the European people transferred there: various articles for newspapers, some short stories and six novels, Touriste de bananes, Quartier Nègre, Long cours, Ceux de la soif, L’Aîné des Ferchaux, Le Passager clandestin.
In Touriste de bananes we find several classical elements of Simenon’s narrative work, such as the “crossing of the line”, accomplished as well by lucky people as by desperate people. The main character in the novel is Oscar Donadieu, who was a second character in another novel, Le Testament Donadieu, written in 1936.
The much honourable, powerful and wealthy family of ship owners in La Rochelle is in disintegration because of one of these events that Simenon will make us know only at the end of the book, and that determinates this crumbling. Oscar is emblematically representative of this. He crosses the line and believes he has cut ties with the past, making a new life on fully different bases. Enough with money, enough with social duties, enough with convenience facades. He’ll live in contact with nature, with things he’ll know how to realize and procure with his own hands. A simple life far away from the one he lived in La Rochelle. Tahiti is the mean, Tahiti will be his rebirth.
But already on the ship the first blows hit his dreams: things, they say to him, are not like he imagines, event the island is now corrupted and European people have brought vices, interests, meanness that have also contaminated native people. Many of the ones who come from the old continent have the same aspirations than his, and they become “bananas tourists”. This is the tile of the novel and the definition of these wreck-men of tropical life, who sway between sad drunks and women of easy virtue, between bleak nights and unlikely diurnal storms.
Oscar doesn’t know it (or he doesn’t want to believe it), but when he sets foot in Tahiti, he has already crossed the line and Simenon’s novel will follow him in his constant degradation that will bring him from the best intentions to the worst of situations.
Simenon, very aware of the dynamic of this ambience, puts in evidence the petty existences, full of small and large cowardice, he describes this fringe of opportunists guided by carelessness and egoism that do not take them anywhere.
As he did in so many novels, Simenon wonderfully follows Oscar to the most extreme consequences of his choices, and with the novelist’s usual skill, he makes grow a sense of inevitability and the spasmodic expectation of an event to come.
Which memories and which crimes did Oscar want to expiate by isolating himself in a paradise that seems more like hell? When he’ll reveal it, Simenon will not give any judgments, as he never does for his characters. No moralism, only the description of human destiny, often cruel and cynical.