SIMENON SIMENON "REPORT" - GEORGES SIMENON, THE ART OF FICTION No. 9 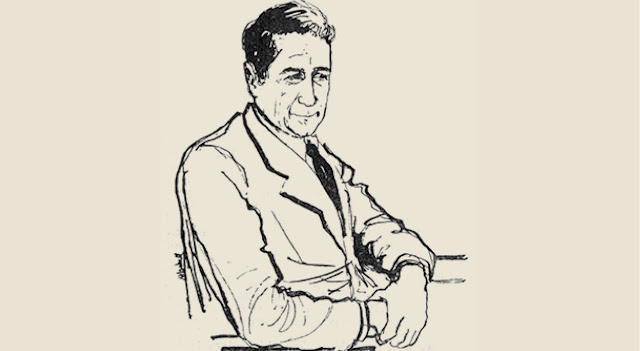 The Paris Review - n. 233 Issue Summer 2020 (from issue 9 / Summer 1955) - Carver Collins - André Gide, who was writing a study of Georges Simenon’s fiction at the end of his life, called Simenon “perhaps the greatest novelist” of contemporary France.
Simenon published his first novel, Au Pont des Arches, at seventeen, and by writing it in ten days began at once his phenomenal practice of rapid production. Using at least sixteen pen-names ranging from Christian Brulls to Gom Gut, he began writing scores of commercial novels—one of them in exactly twenty-five hours—with the intention of training himself for more serious works. He shortened the period of training in commercial novels when he began to write a transitional fiction—his series of books about the detective Maigret. From the Maigrets he moved on rapidly to the tense psychological novel of less than two hundred pages—known to his thousands of European readers as “a simenon”—and of which he has now written more than seventy-five.
Today, except for an infrequent Maigret, he publishes only serious novels. These books, which he writes in French, are not only translated widely but continually used for movies and television—in adaptations which Simenon does not supervise, for dramas which he does not see.

Among his novels currently available in English translation are The Heart of a Man, The Snow Was Black, Four Days in a Lifetime, I Take this Woman, The Girl in His Past, The Brothers Rico, and most recently, in a combined volume, The Magician and The Widow.
Simenon was born in Belgium in 1903, spent much of his life in France, and came to live in the United States ten years ago.
SCENE:
Mr. Simenon’s study in his rambling white house on the edge of Lakeville, Connecticut, after lunch on a January day of bright sun. The room reflects its owner: cheerful, efficient, hospitable, controlled. On its walls are books of law and medicine, two fields in which he has made himself an expert; the telephone directories from many parts of the world to which he turns in naming his characters; the map of a town where he has just set his forty-ninth Maigret novel; and the calendar on which he has X-ed out in heavy crayon the days spent writing the Maigret—one day to a chapter—and the three days spent revising it, a labor which he has generously interrupted for this interview.
In the adjoining office, having seen that everything is arranged comfortably for her husband and the interviewer, Mrs. Simenon returns her attention to the business affairs of a writer whose novels appear six a year and whose contracts for books, adaptations, and translations are in more than twenty languages.
With great courtesy and in a rich voice which gives to his statements nuances of meaning much beyond the ordinary range, Mr. Simenon continues a discussion begun in the dining room...>>>
Pubblicato da Maurizio Testa a 01:04