About Simenon’s production under pseudonyms 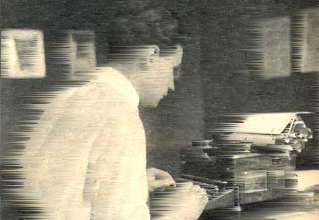 In 1928 Simenon wrote in the popular magazine Le Merle Blanc: “For now, this is a quiet month, little busy, in fact I promised only seven novels and twenty-three short stories…” Yes, you read well, seven novels and twenty-three short stories. It was in the most hectic period of the simenonian production, indeed that of the popular novels, and to write them Simenon was also able to keep a work rate of eleven hours a day.
At that time his publishers were Fayard, Ferenczi, Prima, Tallandier, Rouff … At that point it has already been two or three years that the “usine Simenon” had been working at full steam. The word “usine” (factory) is not random, in fact, because it is known that his literary production rhythm was so high that it inspired a cartoon to Ralph Soupault (a famous designer at the time), who portrayed Simenon on board the Ostrogoth, while he was at the typewriter and churning out papers he passed to a deliveryman, who passed them to another one and so on, from hand to hand, until they came to the typography that was depicted in the background. Then from the typography carts there came out full of copies of books, obviously written by Simenon. And the comment under the picture told: “Georges Simenon, le Citroën de la littérature”.
Do you want some statistics? In 1928 Simenon published a good forty of novels, among them sentimental and adventures novels, and also many “gallant” short stories, that is to say little mischievous, subtly erotic texts. In previous years he had certainly not been idle: a good fifteen publications in 1925, 13 in 1926 and 10 in 1927, and still quite an amount of short stories. After 1928 the rhythm began to grow up: almost 40 publications in 1929, not to mention the short stories.
Production in the 30s is still average, but we can already see the consequences of the preparation work that Simenon was doing for the Maigret novels, which would be published in the following years. In 1930 there were 25 publications, in 1931 there were only 14, because from then on what interested Simenon were Chief Inspector Maigret’s investigations, which constituted the leap from that popular literature, which had served him to survive, up to that semi-alimentary literature, which on the contrary was closer to the novel literature that Simenon considered as his goal.
Let’s realize the rhythm Simenon had to keep for warranting such a quantity to his publishers. Three days for writing a 10000 lines novel, that is to say a 20000 novel a week. For a couple of dozen stories he didn't need more than three / four days. Publishers were served and Simenon always respected delivery deadlines.