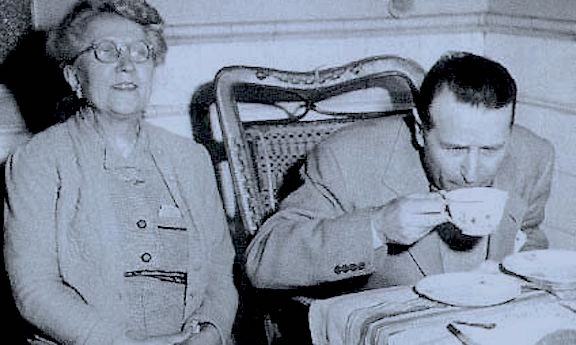 Henriette Simenon died in her 90s as Georges approached his 70s. That her death happened about three quarters of the way through his life makes it a good time for Pierre Assouline to review their relationship in his biography. Describing their differences frequently, he ascribes major influences to their prominently negative interactions. Yet, the fact that Georges attended her sick bed for eight days as she was dying at least hints of some positive component(s). Equally, when Georges took a walk with Henriette through their hometown Liège back in 1952, he was actually “proud of her” even though it was “not the other way around.”
Still, the negatives abound. Assouline highlights how she never stopped rebuking her son, citing her cruel, outspoken reaction to his brother’s death as “the fundamental reproach.” Assouline explains: “She would have liked so much that Georges die rather than Christian. He would have liked so much that Henriette die rather than Désiré.” He notes as well how, during her lifetime, Georges “could be hard when he talked about her,” particularly “when he knew the newspaper reproducing his words didn’t risk falling into her hands” and how he was “equally cruel when he evoked his mother under the mask of fiction,” giving the novel The Cat as an example.
Many other critics weigh in, too: Michel Carly connects Ashbridge’s sacrifice for his brother in The Bottom of the Bottle to Henriette’s reproach about Christian: Simenon wants to exorcise the death of his brother and forget his mother’s words: “How unfortunate it is, Georges, that it’s Christian who died.” Bernard Alavoine quotes Simenon (in his biography for the Center for Georges Simenon Studies) this way: ”We never loved each other during your lifetime, you well know. Both of us, we pretended….” Alavoine indicates this “confession” shows how “the relations between these two strong temperaments are always so difficult.” Patrick Marnham describes Henriette as one of “a tormented race,” underscoring how she “lived into old age and seems to have dominated his emotional life.” Fenton Bresler attributes the “origin” for the author’s “unrestrained libido” to “the difficult relations that Simenon maintained with his mother.” Joan Acocella equates Elise in the autobiographical Pedigree with Henriette, noting how she “has screaming quarrels with the boy” and “weeps and throws fits daily” and “her greatest concern is money.” Dominique Fernandez emphasizes Henriette’s negatives of “reserve, coldness, and thoughtless cruelty” in writing about their relationship. Guillaume Gallienne reports that Simenon “suffered all his life from not being accepted by one woman” and quotes this revealing statement by Georges: “It’s only on her deathbed that, my mother and I, we had an understanding.” Mark Lawson cites “his mother’s cruelty” as one of the “driving forces in his writing” and goes on to highlight “the wound of being unloved by his mother.”
All this documented negativity in a mother-son relationship has stimulated me to read Simenon’s autobiographical Letter to My Mother to see exactly what he himself had to say about it to her—posthumously. Stay tuned.