On how the man was unlike all other men 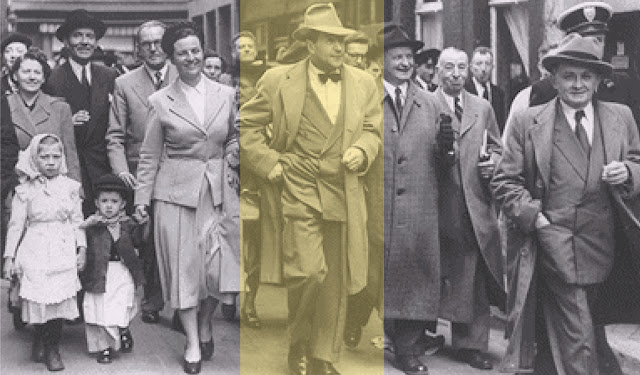 As recently pointed out in a preceding post, the English translation of Pierre Assouline’s French biography Simenon oddly omits the biographer’s 30-page chapter “A Man Unlike Others.” What follows here are some additional condensed, translated extracts that strike me as potentially helpful items for Anglophones curious about the complexity that was Georges Simenon, the man who showed “exaggerated and overflowing behavior externally” while he felt “a constant concern for order and rigueur internally.”
They fall into three categories: First, one learns of Simenon’s likes, and the list of what he “loved” is short (8 items). Here are the 4 major ones: “humility, charity, affection, and man’s capacity to maintain his dignity in situations of weakness and vulnerability.”
Second, one learns of Simenon’s dislikes, and the list of what he “detested” is longer (20 items). Here are the 10 major ones: “crowds, waiting, and total solitude; pride, self-indulgence, and moral dishonesty; social distinctions, regulations, intolerance, and humiliation.”
Third, one learns of Simenon’s fears, and its much longer 38-item listing is only partial here. Assouline explains its length by emphasizing that, in Simenon’s case, “fear seemed to him to be the very worst of feelings […] but it dominated his life.”
So, here they are: “Fear of being a failure, of ending up in isolation, of being locked up in some communal ‘dwelling’ or the like…”
“Fear of being transformed by his success, of not knowing how to dominate it, of getting to the point of no longer recognizing himself, of no longer loving himself. Fear that recognition would no longer act as compensation for his malaise, that success might no longer be the balm or writing no longer the dressing.”
“Fear of becoming too well acquainted with the risk of not being able to write anymore, of seeing his genius weakened by an analysis that would reveal this to him, of shedding light on his internal darkness. Fear that his unconscious mind might be brought out into the light, that his irrational and mysterious parts might be laid bare, that his capacity to create might get blocked, that the miracle [sic] might not reproduce itself on command…”
“Fear of being confronted with failure, of being excluded, of no longer knowing how to distinguish misery from malady, of sinking into madness. Fear of missing everything, of no longer being able to absorb, of being unable to communicate, of being no longer stimulated by an objective. Fear of his behavioral perversity someday becoming structural perversity.”
“Fear of being frightened by his own suffering, of no longer being able to hide it behind mountains of paper, of no longer being able to protect it behind floods of words, of reviving it by having to show it.”
And perhaps the biographer leaves the most important one to the last: “Fear, finally, of no longer being on time.”