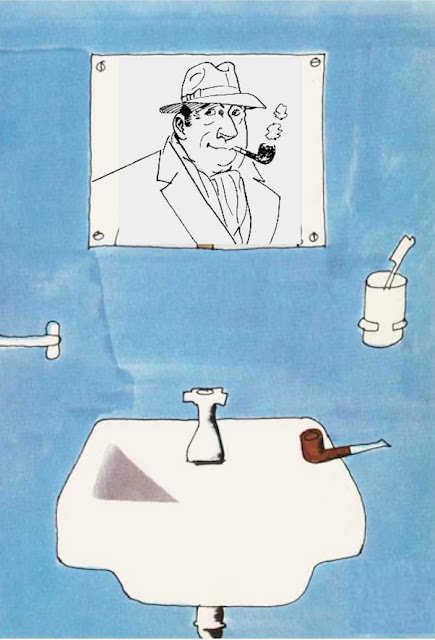 Georges Simenon grew up in Liège, Belgium. His father was a clerk in an insurance office and his mother supplemented their income by taking in boarders, so his childhood was not an affluent one. This genteel poverty led him to demand the best once he was rich enough to have what he wanted, and one of the things he refused to compromise on was the bathroom. This led to extravagances in later life, with nine bathrooms, not to mention twenty-one telephones, in his chateau in Switzerland.
He describes in his memoirs: “I’m no longer capable of staying in a hotel where I don’t have a private bathroom, perfect service, or even to order a meal in a bistro. Why? Because as a child I had no running water in my room nor a toilet other than at the end of the courtyard. I suffered the smell of commodes and washbasins. You only washed “thoroughly” once a week, on Saturday, in the kitchen, using a laundry tub. A change of shirt and socks a week.”
In another memoir, he comments fastidiously that the family of his second wife had only one bathroom, as in all of the older (Canadian) houses. Each member had a prearranged time to use the facility, which must be left in perfect order for the next person.
The preoccupation spills over into his novels, especially those that can be seen as autobiographical. In one of the novels that can be read as an allegory of his relationship with his brother Christian, The Bottom of the Bottle (1949), he has the protagonist (who corresponds with Simenon) reflect that “when he was a child, there was no bathroom at all in the house; you washed yourself in the kitchen once a week, on Saturday. Perhaps it had been to possess a real bathroom that he had striven so hard. To have a bathroom and change his underwear every day!” The protagonist reflects scornfully that his brother most likely lives in a house with no bathroom.
Contrasting the modern bathroom and shower that “is a luxury you would not expect in a lost Arizona valley” is the self-disgust felt by the protagonist for his promiscuous lifestyle. Simenon, who grew up in the Catholic Church and wanted to be a priest until his early teens, repeatedly stressed in later life the fact that he no longer believed. He vigorously defended his right to have his prodigious sexual appetite satisfied, and willing gave gratuitous details to any interviewer, as well as in his memoirs, of his exploits. In this novel, however, we see that his faith may not have been completely subjugated, and the protagonist tries, by showering himself, to remove the guilt he feels over his clandestine activities. To quote Shakespeare: “The [gentleman] doth protest too much, methinks.”
In post-war Paris, the Chambre Syndicale de la Savonnerie estimated that a mere fifteen percent of dwellings in Paris possessed bathrooms. As late as 1959, Raymond Queneau’s Zazie dans le métro has his protagonist Zazie remarking that eleven percent of flats have no bathroom. Yet Simenon’s chief protagonist, Inspector Maigret, has a small cabinet de toilette in his apartment, in which there is a bath for Maigret to soak in. His wife Louise always rises and has her bath before waking him in the mornings.
Simenon does not take for granted that his characters will have access to modern conveniences; Maigret is always amazed when he finds them in houses, flats or apartments he visits. In Maigret chez le coroner (1949), the inspector travels to Arizona, where he is overwhelmed by the richness and cleanliness of American society. The poverty is “polished up, disguised, and hidden away”, to quote Jane Eblen Keller in her analysis of this novel. In Maigret et le corps sans tête (1955), a chief character has a spotless apartment with a full-sized bathtub. In this same novel, the inspector solves the crime because of the stark cleanliness of the crime scene, out of character for the protagonist.
This insight into a writer who suffered deprivation in his early years and spent the rest of his life trying to compensate makes him very human.