SIMENON SIMENON. PORTRAIT OF A COMMON ANTAGONIST IN A MAIGRET

On a frequent Simenonian character: a liar, a cheat, and a failure 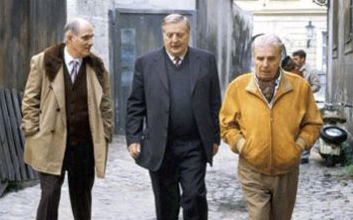 Maigret’s Childhood Friend, the English translation of L’ami d’enfance de Maigret recently released by Penguin, presents a complete portrait of a type often encountered by the Chief Inspector during his career.
Léon Florentin shows up in Maigret’s office all of a sudden to reveal he risks being charged for a murder just committed. The victim was his girlfriend Josée. Aware he was not “ her only friend,” a knock on her apartment door sent him running into the bedroom to hide inside a wardrobe. After hearing a shot, he eventually built up the courage to come out and found the front room empty—except for Josée’s corpse. Maigret goes to the crime scene immediately, and a complicated investigation ensues. Josée was a master manipulator who had been juggling five lovers. Most of them knew nothing or little about their competitors. She had been acquiring money from three of them and amassing love from the other two.
Maigret and Florentin had been “classmates” for five years as teenagers, and Maigret has vivid memories of him as “the class phony” who told “more or less far-fetched” stories and “did not distinguish between truth and lying.” In the most recent 20 years, Maigret had only encountered the man once at which time he had introduced “Monique, my wife,” but this time he admits, “I never married her.” So, Maigret quickly senses he was continuing a lifetime pattern of lying. Indeed, as “his friend” insists, “It’s the truth,” Maigret recognizes he “had been play-acting all his life” and warns him to “Stop playing the clown.” With blatant lies and fraudulent schemes surfacing one after the other during his investigation, Maigret “detested finding himself in a false situation again.” Still, despite openly criticizing Florentin—“You always lied. You lied for pleasure”—secretly Maigret asks himself, “Was he the murderer?”
In fact, the Chief Inspector remains oddly “hesitant” about considering him guilty even as he uncovers incriminating information about his “friend.” For instance, since Florentin’s claim of “having a profession” as an antique dealer “rang false,” the detective inspects his “shop” and concludes he “did not make his living selling furnishings” at all. Plus he discovers a tin cookie box from Josée’s apartment. Stuffed with cash, it contained her life savings. Recognizing the man “who would have devoured her last penny” had robbed her after her murder, Maigret confronts him. After grumbling the familiar caveat, “I’m not judging you. I’m trying to understand,” he then forces a confession from the thief. Maigret also determines Florentin had been coaxing money out of her from funds provided for her support alone by her other lovers. In time, Maigret discovers that, right after her murder, Florentin had also stolen letters the other men had sent her, which he planned to use as tools for future blackmailing. When Florentin throws himself in the Seine, Maigret remembers him as “the best swimmer among us” and interprets this as just another fake by the “aging failure” to create distraction and attract sympathy.
Having lost his primary income source in Josée, the “half parasite, half con man” tries to bamboozle money from another suspected lover for Josée’s “funeral” expenses. Not only does he undertake this scam in the waiting room to Maigret’s office, but also, when that fails, without taking a breath, he squeezes Maigret directly for some money. Perhaps unsurprisingly, even as Florentin acquiesces, “What’s the good in cheating you? There’s no point in trying to delude you,” Maigret hands him some cash and shakes his hand in a familiar display of sympathy for “his former comrade.” Review of Florentin’s criminal record—three convictions for bad check writing, swindling, and forgery, all capped with prison terms—raises him right to the top of the Chief Inspector’s suspect list. Admittedly, Maigret would have already arrested him “had he not been his classmate.” No wonder Simenon asks, “Was it out of pity that Maigret had not arrested him?” On the other hand, when Florentin makes the major faux pas of insulting Maigret’s father, the son can barely restraining himself from slugging the “scoundrel.” Thus, Florentin, the “friend” who “lied from start to finish,” puts Maigret in a situation where “all reasoning led back to him” as “the only logical culprit.” However, you will have to read this novel to the very end to learn, out of Florentin and the other four suspects, who was guilty and of what.