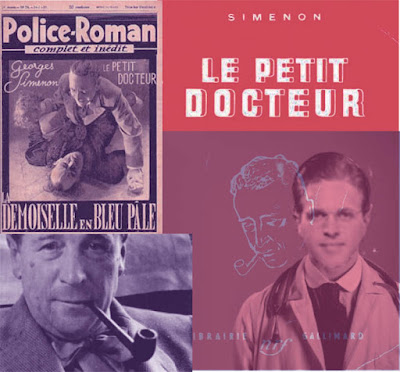 When I stumbled upon Simenon’s Le Petit Docteur recently, I was delighted. In 1938, he wrote 13 short stories starring a country doctor in the role of an amateur detective. They appeared originally in the serial Police-Roman from 1939 to 1941. A volume collecting them all came out in 1943. A collection in English translation, The Little Doctor, appeared in 1978. Francophone television adaptations of six stories played in 1986.
All of the stories intrigued me, a doctor, having noticed in my reading how important the field of medicine seemed to be to Simenon, the author, and Maigret, his character. Many, perhaps most, Simenon/Maigret readers may not have noticed that Jules goes to medical school before he becomes a cop. Not only that, he continues to study medicine throughout his career as a detective. Indeed, Maigret subscribes to a British journal of medicine, the Lancet, and borrows medical texts from his best friend, Pardon, a doctor. Most know that the Maigrets and Pardons meet for dinner every month, but how many recall that the two men withdraw after dinner to talk medicine? As a result, it should not be surprising that Maigret often uses his medical knowledge when practicing what was clearly his second choice as a profession.
While reading the Little Doctor stories, I never imagined I would end up sharing my impressions of them with anybody, let along posting them in the blogosphere. I’m going to read the English translations of these stories, which average 25 pages each, with the plan of passing on short reviews of them, hoping to stimulate others to sample them. A primary focus will be on pointing out how the two detectives, Jean Dollent and Jules Maigret, share some traits and differ at the same time.

• This subsequent discussion of the first story reveals how the country doctor becomes an amateur private detective on his first case.

As one might expect of the first story in the collection of 13, The Doctor’s Hunch introduces the Little Doctor, outlining his personality, style, and technique while explaining how he gets hooked into solving crimes. One learns for example that his affectionate nickname (his real name is Jean Dollent) stems from his small stature, kindliness, lack of frills, and tiny car. He lives, practices, and sleuths in Marsilly on the Atlantic coast, where Simenon also lived for 4 years during the 30s.
Having paid little attention to anything but medicine in his life so far, the doctor could never imagine snooping out a fatal stabbing all of a sudden. Previously unaware of his exceptional gifts of observation and reasoning, he leaps to piece the puzzle together as a series of unknowns pop up, one after another, right in front of his nose: he realizes the strange phone call begging for help at an isolated location cannot have come from there. He recalls the caller’s peculiar demand during an earlier office visit for sleeping medication dissolvable in liquid. Finding the house empty, he notes fresh signs of life. Helping himself to a bottle of vermouth to quench his thirst, he tastes sodium bicarbonate, an insane ingredient. He finds muddy shoes where there’s been no rainfall in weeks. Poking around outside, he spots freshly turned earth and, spading it away, he uncovers a corpse!
Jubilant to discover talents that will bring him huge pleasure, Jean Dollent delights in his new role. With cockiness, intuition, and reasoning evoking Hercule Poirot, his mind never stops working and figuring everything out flatters his vanity. In doctoring the wounded accomplice and ensuring the knife-wielding killer escapes, he displays sympathy and compassion, the same way Jules Maigret often does. Is this shared pardoning of criminals likely to recur in future Little Doctor stories?
David P Simmons