My Simenon reading has been primarily in French. One very prominent reason for this is because the English translations I did read struck me as inaccurate. My best example of this observation follows. According to the Internet banter, this is not a new subject and there is still an unanswered question. 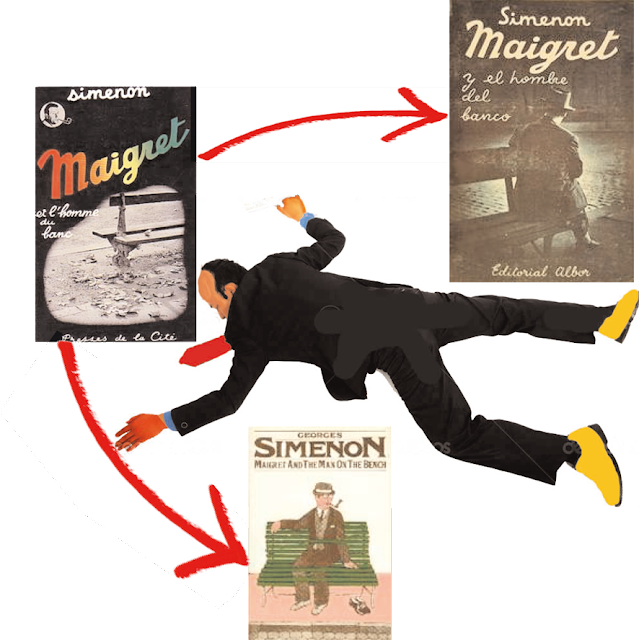 In Maigret et l’homme du banc, some yellow shoes on a corpse play an essential role in the plot because the color is very distinct from that of the shoes worn by most men in Paris at the time. As Simenon specifically states in the book, men’s shoes were ordinarily black, yet these particular shoes were the color of goose dung. That meant greenish yellow where the story was taking place in France, just as it does for geese here in New England right now. But guess what? Those all-important yellow shoes become brown in the English translation, Maigret and the Man on the Bench by Eileen Ellenbogen.
What gives? One explanation for this chosen color appears on Steve Trussel’s remarkably exhaustive Maigret website where John Dirckx responds to the question this way: ‘By souliers jaunes Simenon means shoes of light tan or buff leather--not dyed black. Mme Thouret is shocked to see light-colored shoes on the feet of her dead husband because, like most middle-class Frenchmen in the 1950s, he customarily wore only dark or black shoes. In British English, any shoes of russet, yellow, or tan color are called brown. You can verify this in any of a number of language books, such as H. L. Mencken's "The American Language".
http://www.trussel.com/maig/archive1.htm?zoom_highlight=yellow+shoes+Dirckx
But even if ‘British English’ turned yellow into brown, were brown shoes unusually distinctive at the time of interest? Dirckx seems to imply it, but doesn’t state it. I can cite one avid reader who recalls hearing this scornful comment in the past: “Nobody [in England] wears brown shoes.” Another commentator, a native Englishwoman of a certain age, allows that brown shoes may have been distinctive in the eyes of her male relatives, enough to be out of place on the feet of the average Englishman. However, mon ami M. Google suggests wearing brown shoes may, in fact, have been commonplace in England back at that time. It seems the real dilemma is not whether the shoes should have been yellow rather than brown, but whether brown shoes were sufficiently distinctive to justify and sustain Simenon’s plot.
In light of my updated explorations, I feel less severe about the change now, but still remain puzzled about the thinking behind the choice. By the way, M Google also tells me the Italian and German translations faithfully maintain their shoes as yellow! What do you think? What do you know? How interesting will it be to see the shoe color chosen in the forthcoming Penguin Maigret translation?
David P. Simmons
Pubblicato da Maurizio Testa a 02:04