On an important theme in this Simenon "American Novel" 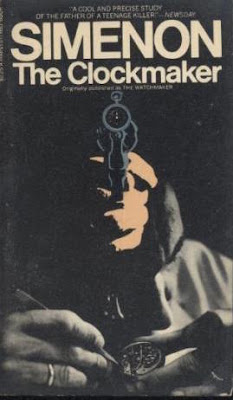 Communication and the lack thereof play prominent roles in this novel. Beyond the focus on spoken expression, numerous communication devices, auditory and visual, impact the protagonist throughout. For the past 15½ years of his life, Dave Galloway has devoted himself exclusively to supporting his only son. In this life as a single parent and a solo repairman, there has been little opportunity to communicate and seemingly little need for it.
Dave works in a storefront and lives in an apartment just overhead, but symbolically there is “no communication existing between them.” Dave confines his social life in this rural New York village to Saturday night backgammon with a friend, his only friend, but “they don’t go to great lengths” to talk to each other. Although the father and son did have “face to face exchanges,” Ben has “always avoided opening up” and Dave has “never talked to anyone” about personal affairs.
When Dave discovers that his teenage son has packed his bag and left town, he is “tempted to stretch out on his belly on his bed and talk to himself, to talk to Ben, head in his pillow,” yet he ends up wondering, “But what would be the point?” The departure is a repeat of the way Dave’s wife left him (with a six-month old baby) “without saying anything.” Divorce papers were their only subsequent communication. As Dave learns his 16-year-old has run off with 15-year-old Lillian, shot a motorist to death, stolen a car, pilfered some money, and triggered a multi-state manhunt, he “wants to scream […] as if distance didn’t exist: Ben!” In a fruitless effort to communicate, Dave writes and tapes appeals for Ben’s surrender. “I don’t blame you. I will always be with you, no matter what happens.” Only impersonal communication from newsprint, loudspeakers, gossip, and police reports results.
Even after the inevitable arrest, Dave doesn’t get to talk to his son. In fact, Ben refuses to see his father. “I have nothing to say to him.” What’s more, their lawyer insists that Dave “above all, avoid talking” to anyone. When father and son do eventually see one another, they still do not talk. Separated on the plane taking then back, they cannot talk. Separated in the courtroom during the trail, they cannot talk. When Dave achieves a transformation of understanding, he starts trying to transmit a calm, serene smile of reassurance to his son, but Ben continues to avoid looking at his father. Even as Ben begins to “toss curious glances his way,” Dave worries that it may be too late to communicate “the message.” Dave promises, if he ever gets the chance, to openly and directly explain what he has just discovered after all these years: that father and son, “they were one and the same.”
Headed to prison for life, Ben searches his father’s face, but is he receiving Dave’s transmissions? Their first prison visit was the “most barren one,” so perhaps the communication barrier will slowly be broken down. And Lillian’s pregnancy offers the chance for a new and better talkative cycle since the novel ends with Dave “speaking softly” to his son’s picture “as he would soon speak to his grandson.” Thus, despite its roman dur nature, The Clockmaker does communicate some rays of hope.