On another important theme in this Simenon American Novel 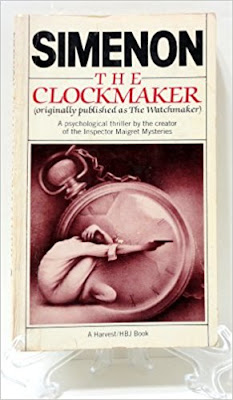 Family issues are important in this novel, and father-son interactions are at the center. Assouline points out in his biography that many of the writer’s works “tried to capture the quintessence of the relationship between a father and his son,” and The Clockmaker is certainly one of them. Désiré Simenon was a very significant figure for Georges, and this story of Dave Galloway’s relationship with his son Ben (and his father) evokes comparison. Typical similarities are the stiff “Goodbye, Dad” and “Goodbye, Son” exchanges of the Galloway men that reproduce the difficulty in expressing family feelings heard in the “Hello, Son” and “Hello, Father” of the Simenon men. In addition, both family pairs share the same silent “winks” of comprehension in front of the complaining wife-mothers.
Simenon nicely balances like father like son similarities with differences in The Clockmaker. For example, Dave is “astonished” he had not died young like his father, which he fully expected “because he resembled him.” Still, the recognition during the trial that all the Galloway men “were the same breed” causes a crucial transformation in Dave. Grandfather, father and son, “they were one and the same.” Pleased the three have the same look (birds of a feather), Dave frames their portraits side by side, so he can admire in particular “the Galloway look,” with “the identical turned-up lip that indicated restrained rebellion.” Simenon supplements Dave’s observation that “in the entire world, there are only two kinds of men, those who bowed their heads and the others” with the explanation that “certain ones could prevent their rebellion from bursting forth their whole life. In some others, it exploded.” Termed “penetration” in genetics, a ‘gene’ like this may manifest with various degrees of suppression or liberation. To my eye, Dave’s father and Désiré stand at one extreme, Dave in the middle, and Ben and Georges at the other end in the spectrum of ‘head benders.’ Dave’s father states his revolt against his marriage by staying out all night long, but just once. Dave expresses his revolt with his marriage, informing his mother “one month later, incidentally at the end of a letter.” Ben begins his revolt before his marriage and expands it in multiple dramatic ways. In contrast to that of the grandfather, Dave’s and Ben’s marriages are progressively defiant acts.
Like the Galloway fathers and sons, the mothers exhibit autobiographical Simenonien elements. Indeed, as opposed to “exalting the memory” of his father, Dave was terribly unhappy when someone exclaimed he resembled his mother! His ongoing unhappiness drove him to escape as soon as he could from her Henriette-like figure. His mother “used to search Dave’s pockets and drawers, and he had never forgiven her for that” (as Georges did not forgive his mother). After Dave’s marriage, she “wished the couple all the possible catastrophes.” No wonder while facing Ben’s troubles, Dave resented his mother’s failure to come see him or even contact him whereas he treasured the spirit of his father by his side. What is more, Simenon ensures that Ben never “at any age” asked questions about his mother. In sum, The Clockmaker mothers recall Henriette and the fathers, Désiré.