On the exaggerated flavor of one of the young writer’s pen name works. 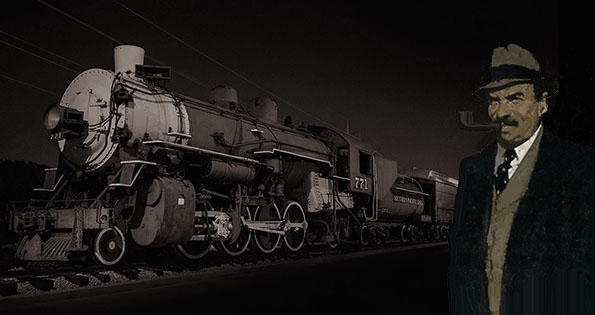 A good opportunity to assess the characteristics of Simenon’s pulp fiction came up while analyzing Chief Inspector Maigret’s first official appearance in Train de nuit (entitled Night Train if the work were ever translated into English). Simenon’s romans populaires reportedly typify his writing between 1924 and 1931 when he published about 190 pulp novels under 17 pen names. Calling these distinctly commercial moneymakers “novels for secretaries,” he acknowledged their “absolute banality.” Their content seems to be all over the block: playful, dramatic, licentious, steamy, crime, detective, mystery, adventure, romance, love, comic, and exotic. Indeed, Simenon’s typewriter did pound out most of these features in Train de nuit, for here’s what I found:
Worldly and treacherous Rita lures naive and innocent Jean into a combined murder-robbery imbroglio in bustling Marseille. Chief inspector Maigret hunts Jean as the prime suspect although Scarface, a villainous gangster, is the actual killer and robber with Rita his accomplice. Gérard, a drug-addicted doctor, is dangerously jealous of the couple while neighborly Déveine, a kindly old man, is admiringly supportive of both Rita and Jean, who begin living intimately together. Henriette, Jean’s devoted mother, and Marthe, Jean’s would-be wife are simple country-folk who hazard coming into the big city on a mission to bail Jean out of trouble.
A complicated jumble of attractions and conflicts ensue: Jean loves Rita physically and Marthe platonically, vacillating between the two. Rita and Marthe love Jean unconditionally, fomenting tense competition. With a David against Goliath confrontation looming between Jean and Scarface, a frightened Jean decides to leave Rita for protective Henriette and Marthe. Desperate to save and thereby retain Jean, her lover, Rita betrays Scarface, her brother, to the police. Vengeful Scarface pursues terrified Rita and Jean, both shielded and hidden by wily Déveine. Dogged Maigret now pursues Scarface as well as Jean and Rita. Maigret corners Scarface as he corners Jean and Rita. With Scarface overcoming Jean, Rita kills Scarface. With Scarface thus silenced, compassionate Maigret lets both Rita and Jean off the hook. Still, Rita will not let go of Jean, now leaning toward Marthe, until Maigret arranges for Déveine, Rita’s long-lost father, to take her away. Maigret arranges for Jean to rejoin Henriette, always his believer, and Marthe, soon his fiancée, back out in the country.
As if love and lovemaking and passion and romance and jealousy and revenge themes are not enough, Simenon sprinkles in tons of action: Cops track their targets with tails, stakeouts, manhunts, and raids. The prey resist capture with tip-offs, hideouts, running feet, and rooftop climbs. Punches, fights, and falls produce wounds and fractures, but shootings dominate. Cops shoot crooks, crooks shoot cops, and crooks shoot crooks. Even if the machine gun never fires, there are 11 distinct gunshots!
Colorful characters… Crises and suspense and surprises… Dizzying action. If Train de nuit is representative, no wonder these works were popular novels.