An analysis of the conflicting sexuality of Simenon’s protagonist 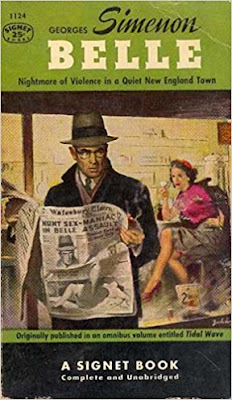 Why does Spencer Ashby in Belle turn himself from being a completely innocent man into a horribly guilty one? Simenon sets the stage for his actions with an expanding portrait of a man victimized by sexual conflicts that necessitate constant repression of his sexual feelings.
First of all, Spencer suffers shame whenever confronted with sex. The mere sight of “an obscene photograph” as an adolescent caused him intense anxiety. That “most painful moment in his life” is redoubled by his shame upon seeing Belle lying on the floor, dress above her waist, panties rolled up into a ball beside her body.
Spencer has always felt those who talked about “things sexual” were “indecent,” and so as a man, he has lived a restricted, isolated existence. Frankly admitting he has “spent his life fleeing from sin,” he has had very little exposure to sex. “I didn’t search for it.” The sex he has had was with “professionals” ten times; the extent of any sex with “his wife” remains unknown. While he may not have a full Oedipus complex, in essence he married his mother. In fact, he thinks about calling his wife Christine “Mommy” and “in talking to her, the word used to come to his lips.” In contemplating how much his mother and wife were look-alikes and wondering if “maybe that explained nearly everything,” he compares their photographic images and concludes “they were of the same kind.” It seems quite likely the couple had not consummated their marriage. In Simenon’s plain terms, Christine “was not amorous in the full sense of the word. She was incapable of passion.” They have no children, and it is not known if they tried to. They appear to live together “rather like two big buddies” as opposed to lovers. That Spencer only leaves the security of his study-workshop, his private “cubbyhole” in “the way an animal pops up out of its hole” at those times “when the house is empty” suggests disinterest at the least.
Spencer is a mess of conflicting sexual fantasies and repressions. A voyeur constantly spying on Sheila, his next-door neighbor, he exaggerates the message of her pink nightgown and envisions tiptoeing into her bedroom and making love. Spencer is also into legs. Repeatedly studying Anna, the police stenographer pulling her skirt down on her exposed thighs, those “pale columns,” he interprets her actions as come-ons meant for him alone. Excited by a woman “so female that one blushed just looking at her legs,” this mixed-up man is not credible in insisting that “not one time had he ever looked at” Belle’s legs or in complaining that Christine had only the “flesh of a sister or mother.” With images of Belle, dress up, panties off, flooding his brain, both while awake and in his dreams, Spencer persistently attempts to deny any interest in Belle because “sexually, for him, she had been neutral.” Although often contemplating “what sort of bodies women had under their clothes” and noting Anna has “big breasts and a big bottom that wiggled when walking,” Spencer claims “he never thought she [Belle] could have breasts.” Yet, when quizzed about his time of “going to bed” the night Belle died, going to bed with her is his foremost thought.
Thus, Simenon nicely sets the stage for innocent Spencer to become a guilty man.