SIMENON SIMENON. SOME CHRISTMAS STORIES ARE COMING OUT SOON

Glimpses of a forthcoming Penguin translation for Anglophones 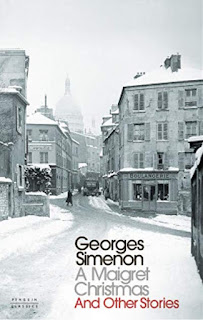 In timely pre-Christmas fashion, Penguin will release paperback and Kindle editions of A Maigret Christmas: And Other Stories as English translations  through Amazon on October 25 in UK and November 1 in the USA.
Limited to three tales, they all transpire in Paris around Christmas time, but decrease in length successively and, I suspect, diminish in familiarity to Simenonophiles. Indeed, because it is likely to be an unknown to many, the final story receives more attention herein.
A Maigret Christmas starts the collection as a ‘long’ short Christmas Day story. Curiously, it is the only one that involves Maigret, who in rather typical fashion solves rather ordinary ‘crimes’ that include theft, murder, and betrayal. But there is a gratifying bonus, a ‘crime’ of a different sort that provides a sustained look at Jules and Louise in their apartment dealing with an evolving mystery across the street. They are deeply touched by it, and readers will be touched by their response. Seven Little Crosses in a Notebook follows as a shorter Christmas Eve story. Its plot stems from a down-and-out father’s effort to purchase a Christmas present for his young son only to end up with the poor man arrested for murder. After the police and the boy independently discover someone else is the killer, light bulbs illuminate on the wall map at police headquarters to reveal sequential activation of call boxes in an unusual zigzag pattern throughout Paris. The urgent question for the investigators becomes: is the boy fleeing his pursuer or baiting the assassin?
The Little Restaurant in Les Ternes (A Christmas Story for Grown-Ups) tags along, like a caboose, as an extremely short Christmas Eve story. Three customers are eating a late night dinner in a little restaurant at separate tables when, all of a sudden, the only male shoots himself in the head and drops dead. Naïve country girl Martine is shocked, but worldly prostitute Jeanne is unmoved. Agitated Martine flees to the nearest bar with curious Jeanne on her tail. Some “men of the world,” acting” as if everything belonged to them,” make a beeline for “pretty, chubby” Martine with her “entertaining bottom” and “up and out breasts swelling her blouse.” Tough “Big Jeanne” calmly watches the tipsy “little imbecile” falling into the trap of seduction until suddenly she swings into action. Shouting, “That man is mine! You stole him from me,” she initiates a catfight with bewildered young Martine. The summoned cops drag the two women off to jail where Jeanne eventually educates Martine on how, although crammed in with tramps and drunks, it is better to spend the night in a jail cell than in any rogue’s bed. “You think it would have been nice with a jerk like that on Christmas Eve?” She goes on to explain: “You can thank the dead man [who happened to be a former client of hers]. He gave me the urge to play Santa Claus once in my lifetime.” And, as she falls asleep, she sums things up pensively: “Imagine if everyone could play Santa Claus once… Imagine, I say… Just one time… Given all the people who live on this earth….”
Of note, all three of these Christmas stories could transpire—and captivate—on any day of the year.