SIMENON SIMENON. THE STORY OF AN ESCAPEE FROM HIS FAMILY’S CLUTCHES

On the liberation theme in a “roman dur” recently translated, “The Mahé Circle” 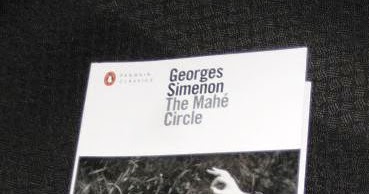 Escape from long-term imprisonment for François Mahé begins when, all of a sudden, his mother dies. Upon first learning she has breast cancer, the pathetic pawn blames himself as a suckling: “Without doubt, he had wounded her breast when he was a baby.” But her quick death actually becomes the catalyst for his liberation process. With his mother gone, his wife “suddenly seemed insignificant.” François feels “he had to break away from the environment that seemed a frightening void” and he now has “the right to follow his route and not that of others.” Recognizing “life no longer had any flavor” within the family circle and all the Mahés “were working to prevent him from escaping” it, he now “would do what nobody wanted him to do.”  Indeed, “they would not manage to restrain him. On the contrary! Their opposition energized him.’’ Although before his obsession to be on the island may have been “a shameful yearning,” now it is off to Porquerolles for a fourth visit, this time with “the feeling he would never come back.”
Once there, François does little more than ignore his wife and children, drink more and more, and try to connect with Elisabeth. Finding she has moved off the island, he goes to the mainland to find her. Although “she was not there, that changed nothing in his plans.” Leaving a trumped-up job offer to lure her back to the island, he starts hatching an “amazing number of schemes,” such as breaking his leg deliberately and claiming neurasthenia falsely, all designed to allow him to stay on Porquerolles. After all, “was he not free to lead his life on his own terms?” When Elisabeth does not respond, he repeats his efforts to meet up with her three more times. He spots her brother, and then her sister, and the last time a girl he thinks is Elisabeth, but his familiar “immobility” takes over and he does not speak to anyone of them. Like a moth attracted to a light, François circles but never contacts her.
With the return to Sainte-Hilaire close at hand—“Did he already know he would not leave?”—François has “the dream” in which he approaches a smiling Elisabeth. The woman “wearing the red dress that had become too short” lets him embrace her and he speaks at last: “It had to be! I loved you too much.” She responds, “I knew it,” but he does not hear his own voice: “I came to get you for evermore.” The dream ends there. A second dream then pens him inside a “perfect circle” of  “severe, impenetrable” Mahé family faces. Once awake, with images of the welcoming Elizabeth and those restrictive “people of stone” recycling in his mind, Francois buys the local medical practice, so he can stay on the island permanently, and goes off to fish once more for the elusive black croaker fish, the seemingly impossible goal “he had to” pursue from his very first days on the island. Lo and behold, this time, he succeeds! That challenge met, that obsession fulfilled, in answer to his own question, “the question, the only one,” he dives overboard “in order to reach the red dress” that he visualizes on the ocean bottom.” A few days later, they recover his body well outside the “sacred impassable circle. In short, “it was a love story” that “the Mahés would never understand.”