More on Simenon’s two hats during the Occupation 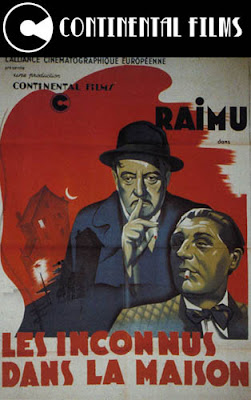 The case for, at least, the look of collaboration by Georges Simenon during the Occupation builds on events like these: in January 1942, uniformed Werhmacht officers were well represented at one of Simenon’s film premiers. After the showing, he held a cocktail party “in the company of the German headquarters general and some of his collaborators.”
As well, a German company produced many (most? all?)  of the nine movies adapted from Simenon, “the novelist whose works were the most solicited” and “the writer the most adapted into movies” during the Occupation. Funded by two Berlin firms and the German Occupation budget, this company considered Simenon “one of its crown jewels.” Working in “close and fruitful collaboration” with its German director, Simenon achieved “his heyday in cinema.” That he made more money in 1941 than he had made in any year since 1925 and half of it came from the movies enabled him to compound this collaborative image. Another notable blemish stemmed from his signed contract in March 1942 that exclusively ceded Maigret, his central and sustaining character, to the German company for three years.
What is more, when Simenon filled out the questionnaire the Germans required for newspaper writing, he blatantly emphasized his Aryan, German, and Catholic roots―not the ploy “of a committed man, but that of an opportunist.”
Clever Simenon also “had the prudence not to publish anything that offended the dominant sensitivity [of the German censors].” He was less careful about a look of collaboration when he was away from the Parisian literary world in his home on the Atlantic coast.
Obtaining “travel passes more often than was his fair share” was “sufficient enough to make him appear suspect to the local Resistance.” In reaction, he tried buying off the resistance fighters with food and wine. BBC broadcasts incriminated him. An underground newspaper placed him on a pro-German “black list.” The “local purifiers” eventually put out an arrest warrant, took away his identity pass, blocked his bank account, and sequestered him. The anonymous detractors who pinned the “mask of a collabo” on him made enough accusations that “his police file” charged him with being “a notorious propagandist, a danger to State security….”
To prove his innocence, Simenon claimed he helped invading British paratroopers by informing them in his home and lending them his car for “a good number of raids.” He described how he evaded Germans coming after him at his house, except for “one small difference.” It had been the Resistance at the door. Judging his file to be “fuzzy,” the Belgian embassy took up his defense, but others considered it “serious,” so he faced interrogation once again. Feeling “the Resistance, police, and French justice system were in cahoots,” he “envisioned the worst: prison.” But, at last, the government investigators found nothing “serious: [just] lots of gossip and envy.” His publications were not “political” and there wasn’t “any specific fact of collaboration.” Since “they had nothing against him,” his house arrest was stopped and his funds freed up. Yes, “the case was closed,” but the wondering did not cease.