SIMENON SIMENON. A YOUNG CHILD AND AN OLD HEART

Some information on the background for Simenon’s "Pedigree" 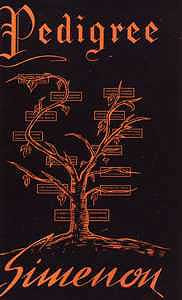 Marc Simenon was born in April 1939, 16 years after the marriage of Georges and Tigy. She had apparently been holding back from a pregnancy until “she judged that he was finally ready, that is to say, mature.” Oddly, irreligious Georges had the baby baptized as a precaution in case he married a Catholic someday. Simenon would later explain why he did not go to Marc’s marriage: he was afraid his first two wives would scratch each other’s eyes out upon meeting there. Another time, he offered a different explanation: “I detest marriage because I considered it inhumane. A monstrosity […] invented to hold people firmly on the right path.” For Simenon, the father, his “idolized more than adored” newborn represented “a way to ensure himself affection in old age.” Perhaps unwittingly, the timeline provided on the official Georges Simenon website (http://simenon.com/) further exposes this egotism: “Simenon used his Leica to capture his pride and happiness in being a father on film.”
According to Assouline, Simenon had finally attained “inner harmony” in his life and “unsuspected well-being” with his child, but just a year and a half later, according to Simenon, there came a disruptive “pivotal moment” in his existence. This crucial episode began with a simple accident. Pain following a blow to his chest triggered an x-ray study that radiologist René Brémier interpreted as abnormal. Informing Simenon he had “an old man’s heart,” the doctor “totally forbid smoking, drinking, writing, and making love.” Simenon quoted the doctor as telling him: “I give you two years to live, provided you follow my prescriptions.”
Stunned, Simenon considered himself “condemned” and lived “like a man on borrowed time” thereafter. He was not only concerned about himself; he was also worried about “little Marc” who was “destined to become a fatherless orphan in two years.” Thus, from Dec 1940 to June 1941, out of concern his son “would find nothing about me,” he wrote The Pedigree of Marc Simenon in the form of a long letter to him in an effort to provide information about his origins.
Appropriately “obsessed with the state of his health,” Simenon consulted three or four other physicians over time, but perhaps inappropriately, or at least inexplicably, he did not accept their assurances of his good health. Actually, the Simenon timeline cited above suggests it was not until mid-April 1944 when he consulted with “two eminent specialists” (a cardiologist and a radiologist) that he finally came away “fully reassured” and “relieved” by the discovery the original diagnosis had been made “in error.” Imagine all those years of worry when his heart had been “perfectly normal” the whole time.
Whether it was an “autobiographical reconstruction” or just “a romantic fiction,” Simenon nevertheless perceived he was “a man living on borrowed time.” Valid or not, this belief seemingly determined that The Pedigree of Marc Simenon evolved through I Remember on into Pedigree. Eventually published in 1945, this latter work, according to Assouline, is considered by many to be Simenon’s “masterpiece.”