Not so "dur" for a Simenon "roman dur" 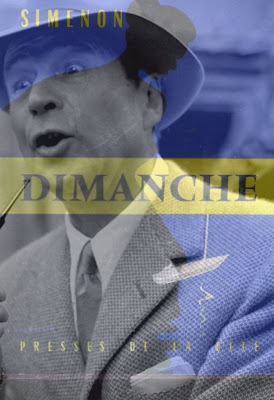 Simenon’s novel Sunday is a tale about a yearlong nefarious plot. A recent review calling it “deceptively light” triggered my read. And, yes, Sunday is different: no rain. No cold. No darkness. No dreariness. No anguish. No despair.
Streaming sun and chirping birds awaken Emile on the opening day. Two white doves coo beside his door, underscoring his “joy” day after day. And, on the final day, Emile kills time, driving around, enjoying the scenery, singing songs….
The day, of course, is Sunday, “the day of decision.” Emile has a plan―a “necessary” and “obvious” solution to a problem. In a completely matter of fact, laid back presentation―he was “not worrying about it” at all―we gradually learn why and how Emile becomes a man on a mission. In targeting his wife Berthe, he has “put all his effort into finalizing it, which had taken some time, 11 months exactly.”
When Emile’s older wife discovers he is having an affair with their much younger maid, Ada, they change from “man and wife” to being “only strangers, more exactly associates” in the inn the couple operates. This inn did and does bind them together, but it also becomes a place where Berthe is the superior and Emilie the servant.
Trouble was brewing for a long time. Berthe’s parents had owned the inn, but when her father died, her mother pressured Emile into marrying her. He “wasn’t enthusiastic” and he wondered if Berthe “was worth the price,” but he foresaw being “master of the house” and leading an easy, lazy life as an innkeeper with plenty of free time to socialize in cafes, drink in bars, play boule, go fishing, and so on. Although the inn seemed to be “his personal thing” at first, Emile began to see he had sold himself to Berthe for the inn and its innkeeper’s life. He realized she “had bought him,” and in that bargain both he and the inn belonged to her.
He was just her “choir boy” and “Madame know-it-all” was “the real boss.” Yet, Emile could still imagine feeling “right at home where he was”―“if only there were no Berthe.”
As for his solution, Emile feels no guilt. Berthe had started it; it was her fault. She is “the enemy.” Having “no desire” for Berthe, “the refrigerator,” he turns to Ada for sex. However, Ada is soon “his dog and his slave” in just the way Emile is Berthe’s. Indeed, his plan for the future doesn’t include Ada at all. What is going to happen could have begun “with anybody or with no one.” Ada had taken on “importance” to him because of Berthe, but in the end she would be left behind.
Emile’s obsession “bursts forth from his subconscious,” but at the same time “without a sentiment of any sort.” He does, however, anticipate feeling “free” from being “a prisoner, a June bug on the end of a string” with Berthe holding the other end.
Enacting a scheme hatched from a pure accident, Emile proceeds systematically but happily, humming away with “a certain inner peace.” His only regrets are that no one can observe and admire his careful preparations and, afterwards, he won’t be able to boast about what he has done in “implementing an exceptional experience.”
Sorry, but you’ll just have to read Sunday to find out who wins, who loses, and why it may not feel like a roman dur, but it is.