About a December first “Black Week” festival and other things Turkish 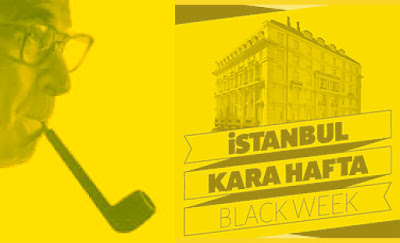 The forthcoming “Black Week” literary festival in Turkey underscores Simenon’s fame. This annual event intends to honor world-renowned literary figures, like Ernest Hemingway, Alfred Hitchcock, Agatha Christie, and Georges Simenon, all of whom once stayed at the Pera Palace Hotel in Istanbul. Opened in 1892 to serve travelers on the Orient Express between Europe and Asia, the hotel is touted as an enduring symbol of urban culture and a pioneer in modern luxury.
Running from December 1 to 3 to honor Simenon, the festival will include panel discussions on crime fiction “in the City, in Historical Novels, and by Female Writers.” Turkey’s foremost detective novel writer, Ahmet Umit, and internationals Philip Kerr, Sam Wilson, Tibor Fischer, and David Walton will participate.
Simenon did visit Turkey twice during a six-week period and did stay at the Pera Palace Hotel. Why this might interest literati is outlined below:
In 1933, the newspaper reporter-photographer published several articles and multiple prints. The prize piece was a true “scoop,” a rare interview with Léon Trotsky, the famous Russian revolutionary exiled by Stalin. Written questions in advance, written answers published word for word, and a promise to not report any conversation were the requirements, all presumably meant to prevent any and all misunderstandings. https://www.marxists.org/archive/trotsky/1933/06/16.htm will provide the fascinating article.
In 1935, Simenon published the novel, Les clients d’Avrenos. An English Avrenos’s Clients doesn’t seem to exist, but here’s its gist: Bernard, a middle-aged French-Turkish interpreter, and Nouchi, a teenage Hungarian nightclub dancer, live together as ‘companions.’ Nouchi likes men around her, but not lovemaking because of an adolescent traumatism. They marry―still without consummation―because she will be kicked out of Turkey unless married to a ‘legitimate.’ In the restaurant run by Avrenos, they party with some marginals: a crooked banker, a ruined nobleman, a Swedish diplomat, an artist, and a journalist, who all fall, more or less, in love with Nouchi. To court her, the diplomat abandons his Turkish girlfriend, Lelia, who attempts suicide twice, but Bernard saves her. Nouchi encourages Bernard to seduce Lelia, but instead, he abuses her. Lelia jumps off a balcony and is paralyzed for life. Lethargically, Nouchi offers herself to Bernard…. Sounding roman duresque?
In 1939, Simenon published the short story, Le policier d’Istanbul. As far as I can tell, The Istanbul Policeman did not come out in English, but a film adaptation called The Tangier Cop probably continues its flavor: a semi-alcoholic cop, who spends most of his time in a brothel, rolls with several other oddballs: a rich American vagabond, a German mother and daughter who commit petty crimes, a slick gangster, and a homosexual British art collector. When one of them becomes a corpse….
And over time, movie adaptations resulted, Turkish characters appeared in Simenon’s other fiction, and Turkish memories showed up autobiographically. However, somehow to me, Simenon’s Turkish products don’t sound very Turkish…