SIMENON SIMENON. “MAIGRET AND THE MAN ON THE BENCH: COMES OUT TODAY 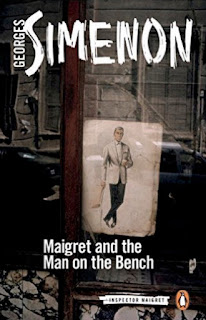 Maigret and the Man on the Bench, Penguin’s English translation of Simenon’s Maigret et l’homme du banc, will be available through Amazon.uk as of March 2, 2017. Both paperback and Kindle editions are expected.
The opportunity for delivery of the paperback to the USA will appeal to some because the paperback and Kindle editions will not be available from Amazon.com until October 3, 2017. I
n contrast, March 2, 2017 holds as the release date for the following other Amazon sources: Australia Kindle; Brazil Kindle; France Kindle; Germany Kindle; India Kindle; Italy paperback and Kindle; Japan Kindle; Mexico Kindle; Netherlands Kindle; Spain paperback and Kindle.
Unfortunately, the later October 3, 2017 release date pertains to these remaining Amazon sources: China paperback; France paperback; Germany paperback; Japan paperback; Mexico paperback.
Be aware the ISBN-13 for this new edition is 978-0241277447, which should facilitate searching for the book from various other sources.
An audio version from Audible.com is not yet visible on the horizon.
Maigret et l’homme du banc originally appeared in 1953. The English translations Maigret and the Man on the Boulevard and Maigret and the Man on the Bench did not first appear until 1975, and there have been eleven editions in total. Its translator was Eileen Ellenbogen then, and now the translator is David Watson.
The original work was the 69th in Simenon’s order of publication, and this work is the 41st in Penguin’s modern series of translations.
This book appealed to me for these features in particular: it documents (for the second time) that the Maigrets had a child and adds that she died at birth, both likely contributing factors in the positive feelings for children they display throughout the series. In addition, Maigret sorts out numerous incongruities in the evidence he gathers. He also displays compassion for two of several criminals by not charging them. And finally, one also gets to observe Fred the Clown, sort of a Sad Sack character, and Arlette, a seductive young woman.