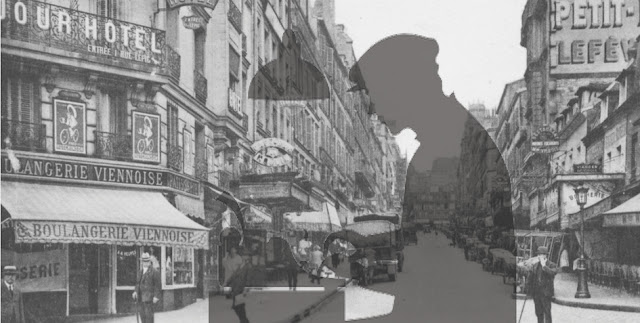 While the physical and social context of the three authors' texts remains the Paris of the 1920s (and in Simenon’s case part of the 1930s), each author brings his own perspective on life in the city which enables the reader to see the settings from a range of points of view.
The most obvious difference between the three authors is that while Simenon is writing fiction, Hemingway’s and Orwell’s texts are written in the first-person and are explicitly autobiographical. This distinction should, however, be treated with a degree of caution. Simenon once famously declared that he totally lacked imagination and that therefore all of his stories had an origin in real places, people and events, and the novels in question indicate his familiarity with social conditions in the poorest Parisian quartiers, life in the grand hotels and the bohemian circles of Montparnasse. Hemingway, on the other hand, states somewhat enigmatically in the preface to A Moveable Feast that ‘if the reader prefers, this book may be regarded as fiction. But there is always the chance that such a book of fiction may throw some light on what has been written as fact.’ As for Orwell, his private comments suggested that while his descriptions in Down and Out in Paris and London of the Hôtel X and the Russian restaurant were ‘exact’ and ‘entirely accurate’, he also added that the chapters following his descent into poverty ‘are not actually autobiography but drawn on what I have seen’ and that the characters are ‘intended more as representative types.’
Although the Maigret stories and Le Petit Saint are narrated in the third person, the focalisation of the narratives is realised through the eyes of the central characters – Maigret and Louis Cuchas respectively. So, the reader’s impression of Parisian slum life, bohemian Montparnasse and the grand hotels is mediated through a particular prism, that of the petit-bourgeois policeman and the artist who has risen to success following an impoverished childhood and adolescence. It does not follow, however, that this narrative perspective necessarily coincides with Simenon’s own views. For example, while the author was an enthusiastic participant in the nightlife of 1920s Montparnasse and a keen traveller to foreign countries, Maigret, with his deep sense of “Frenchness” and tradition, is disconcerted by all of the non-French characters he encounters in Pietr-le-Letton, La Tête d’un homme and Les Caves du Majestic, be they poor immigrant workers, bohemians or American millionaires, viewing their presence as a symptom of disorder and unwelcome social change. Equally, Simenon assiduously cultivated friendships with numerous artists, such as Vlaminck, Pascin, Kisling and Foujita (even selling the American bar from his apartment in the Place des Vosges to the latter), whereas Cuchas, le petit saint, remains deliberately apart from this milieu: ‘Louis had not been involved in any group. Nobody in Montparnasse knew his name.’
Orwell’s and Hemingway’s accounts have a strong sense of being written from the inside of the social contexts they describe which, in turn, can inform a richer perception of certain scenes from Simenon’s novels. Reading the Parisian memoirs of the former, and appreciating the sense of insecurity felt by the city’s immigrant workers, Maigret’s descent on the Au Roi de Sicile boarding house in Pietr-le-Letton, and his raid on the Citanguette bar in La Tête d’un homme, in which Arab and Polish workers are arrested for the “crime” of their papers not being in order, assumes a more sinister light. Similarly, the reality of Prosper Donge’s daily twelve-hour shift in the caféterie of the Majestic, with the heat and bustle of peak times in the service quarters, comes to life more vividly with a knowledge of Orwell’s description of life behind the scenes in the Hôtel X. The Parisian-American literary milieu, whose financial position is such that even the self-proclaimed “poor” Hemingway can afford to travel widely, eat in prestigious restaurants, drink in upmarket bars and take trips to the races, is to a considerable degree self-contained, mixing mostly with each other, speaking English, and whose main contact with ordinary Parisians is in their role as waiters. A Moveable Feast gives a strong sense of the separation between this group and the French population in the light of which the chasing away of Heurtin from the terrace of La Coupole in La Tête d’un homme, an outsider because of his lack of financial means in the capital city of his own country, takes on an additional poignancy.
Simenon, Orwell and Hemingway are all rightly recognised as giants of twentieth century literature. Differing in many fundamental ways, personally, artistically and politically, they shared in common, each in his own distinct way, an experience of life as young foreign writers in 1920s Paris. And, for the reader of Simenon, a familiarity with the Parisian texts of the Englishman and the American may come as an unexpected yet powerful source of insight into aspects of the former’s portrait of the city.