SIMENON SIMENON. THE UNIQUE MICROCOSM IN “ABOARD THE AQUITAINE” 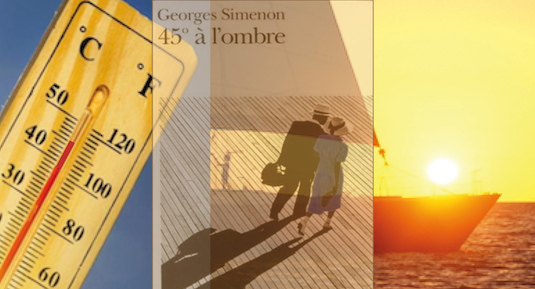 This early (1936) roman dur presents a no-holds-barred portrait of debilitating conditions and disturbing interactions affecting passengers tightly confined aboard ship. The ocean liner carries both people and merchandise. The population includes three classes of passengers and a mass of 300 Vietnamese train track workers plus tons of green bananas. During a troubled voyage off the West African coast from the subequatorial mouth of the Congo River to the subtropical Canary Islands, the effects of heavy heat, rolling seas, and stressful relationships stand out in particular.
The heat is overwhelming, day after day. As they move through “a universe crushed by a heavy sun,” the thermometer already reads 118º and yet “the heat was becoming more humid and disagreeable.” Although “the fans sent a constant, tiresome vibration through the air,” still “there was not a breath of air and the walls were scorching hot.” Imagine living for days with “heat coming off the land in heavy puffs” with “big wet half-circles” under arm, ice cubes “melting in a few minutes,” and “drinks nauseatingly tepid.” As if the heat were not enough of a problem, the sea is always unruly. “Rolling had an impact right away” and seasickness immediately rules since “the swells ruled every hour from one end of the year to the other.”
To make matters worse, all of a sudden, the ship “hits a pebble.” The damage is a torn hull and a burst fresh water tank. Salt water runs in, causing a disturbing list, and fresh water runs out, forcing strict rationing. With people holding onto railings and glasses sliding off tables, the audible pumping is as frightening as the palpable listing. Even if not sinking, noises from a “deformed camshaft” and “a squeaking propeller” add ongoing reminders of the peril of breaking down out at sea.
No wonder “everyone was worn-out.” These calamities disrupt their “everyday life, the traditional incidents,” the existence in which everybody drinks too much because “aboard ship there is nothing else to do.” However, this is not strictly true, for Simenon gives the passengers many trivial opportunities to fill their time and minds: three-a-day sit-down meals in the dining room; cocktails day and night in the bar; dances, shuffleboard, card games, toy horse races, etc. on the decks. When not playing, drinking, and eating, they are busy skirmishing, screwing, or sleeping. “It’s the same thing on every voyage.”
Just who are the author’s colorful and contrasting misfits? A rich discontented colonial committed to causing difficulty for each and everyone on board. A down-and-out young couple desperate to reach France with their dying baby. A crazed military doctor heading for a different fate: an insane asylum. His merry wife running the gamut with eager men. Her competitor, a flashy predator with similar lustful goals. A swarm of disdained “Yellows,” out-of-work laborers vegetating in passageways and corners, dropping like flies under the scourge of Yellow Fever. All the while, the man in charge of health and well-being on board, dispassionate and detached, protagonist Dr. Donadieu observes way more than he practices.
One can count on straight talking Georges Simenon to tell it all!