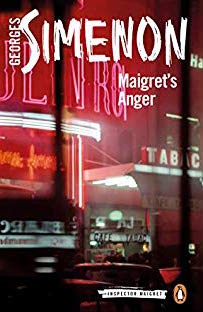 Maigret’s Anger, Penguin’s English translation of Simenon’s La Colère de Maigret will be available through Amazon.co.uk as of November 1, 2018. The paperback will be available from Amazon.com on this same date, but the release date for the Kindle edition is scheduled for July 2, 2019.
November 1, 2018 holds as the release date from the following other Amazon sources: Australia Kindle; Brazil Kindle; China paperback; France Kindle; Germany Kindle; India Kindle; Italy paperback and Kindle; Japan Kindle; Mexico paperback; Netherlands Kindle; Spain paperback and Kindle.
November 19, 2018 is the release date for the paperback in Australia.
A July 2, 2019 date applies to these other Amazon sources: Canada paperback and Kindle; Brazil paperback; France paperback; Germany paperback; Japan paperback; Mexico Kindle; Netherlands paperback.
Be aware the ISBN-13 for this new edition is 978-0241304013, which should facilitate searching for the book from various other sources.
La Colère de Maigret originally appeared in 1963. It came out in English translation as Maigret Loses His Temper in 1965 with nine subsequent reprints through 2003. The translator then was Robert Eglesfield, and the translator for this newly entitled Penguin edition is William Hobson.
The original work was the 89th in Simenon’s order of publication, and this work is the 61st in Penguin’s modern series of translations.
Maigret’s investigation of a seemingly moral man’s murder extends into the corrupt underworld of criminals involved in nightclubing, racketeering, cat theft, extortion, and police protection. When the moral Chief Inspector appears to be tainted by accepting pay-offs as well, the angry man intensifies his inquiries and interrogations….