SIMENON SIMENON. THE TRAGEDY OF DESTINY

Some insights into Simenon's way of writing 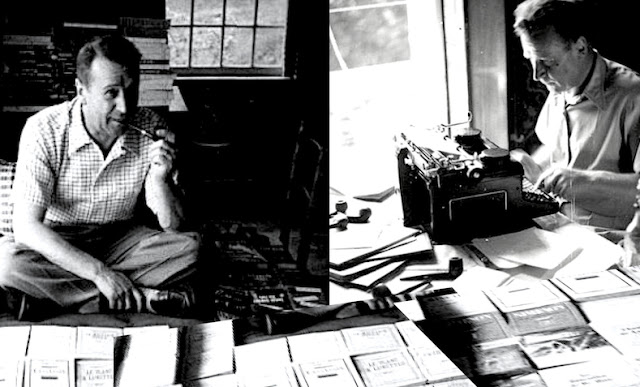 A quite unbreakable interweaving. We're speaking about themes in Simenon's works that are relied to destiny, particularly in the romans durs, and about the novelist's creative vein. We know that what he called état de roman was a kind of trance that seized him and led him to the development of the plot and the character's life course. The novelist always maintained that he didn't know anything about this plot at the moment he was about to start a new novel.
"I never knew, when I was beginning a novel, how it would end. Never…." This so categorical assertion is f course Simenon's, and he spoke so many times, among others in a 1982 interview with Professor Piron and journalist Sacré that took place in Lausanne.
Simenon's only preparation was notes on the famous yellow envelopes, some names, some dates, some relationship between characters, some street names… Yet the central phase was that of "entering into the protagonists' skin". Precisely the part Simenon would live for the eight to ten days that were necessary to finish his novel.
"...once I have my character well in mind, the question that arises is this one: what can suddenly happen to that man that will oblige him to follow his destiny up to the most extreme consequences? In reality we are all characters of tragedy - Simenon explained in this interview - we're all saints and criminals, and it's the circumstances which make that some people become criminals and other saints…" Thus we are in the absolute domain of the case. When an insignificant event can overthrow a human being's life, and at that point it's his destiny, to which he cannot resist, that will guide all the events for the protagonist.
And here Simenon calls for tragedy as a literary genre, making singular statements… "… I think that today the novel should be… (I don't say it is, yet I tempted to do it, even if I think I'm far from having succeeded in it) the equivalent of tragedy, of what tragedy was…"
We're right in Greek tragedy, where there is a rigorously organized universe, dominated by absolute necessity, in which man seems to move according to pre-established schemes, without any possibility of modifying the course of events; in short, man, as well as matter, is subject to the iron law of nature that rules the cosmic becoming.
In the same way Simenon slips into his protagonist who "crosses the line" in spite of himself and finds himself dragged into a spiral that will bring him into the worst part of society, rejected by those to whom he was before similar. But a cursed click pushed him far from the ordinary tracks of his life and threw him into nobody's land where his destiny was already sealed and never in a positive sense.