SIMENON SIMENON. “MAIGRET AND THE GHOST” COMES OUT DECEMBER 6 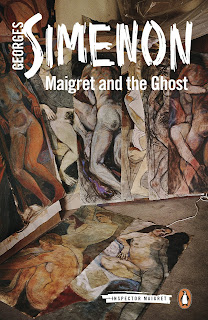 Maigret and the Ghost, Penguin’s English translation of Simenon’s Maigret et le fantôme will be available through Amazon.co.uk as of December 6, 2018.
The paperback will be available in the USA from Amazon.com on this same date, but the release of the Kindle edition will not occur until August 6, 2019.
December 6, 2018 holds as the release date from the following other Amazon sources:
Australia paperback and Kindle; China paperback; France paperback (12/3) and Kindle; Germany Kindle; India Kindle; Italy paperback and Kindle; Mexico paperback and Kindle; Netherlands Kindle; Spain paperback and Kindle.
The August 6, 2019 date applies to these other Amazon sources: Brazil Kindle; Canada paperback and Kindle; Germany paperback; Japan paperback and Kindle.
Be aware the ISBN-13 for this new edition is 978-0241304037, which should facilitate searching for the book from various other sources.
Maigret et le fantôme originally appeared in 1964. It came out in English translation as Maigret and the Ghost in 1976 with eight subsequent reprints through 2003. An additional title is Maigret and the Apparition. The translator then was Eileen Ellenbogen, and the translator for this new Penguin edition is Roz Schwartz.
The original work was the 90th in Simenon’s order of publication, and this work is the 62nd in Penguin’s modern series of translations.
This novel presents the Chief Inspector with a complicated challenge: “Rarely, in a single day, had he gathered as many details in a case….” Nevertheless, driven in particular to avenge the brutal attempt to slay Inspector Lognon, Maigret wades through the seedy morass of the art world to answer questions like: what did Lognon mean when he murmured the single word “Ghost” while lying wounded on the sidewalk? What about the bedroom with obscene drawings and sexual symbols on the walls? Did a lunatic create them?