SIMENON SIMENON. THE RATIONALE IN “ACT OF PASSION” 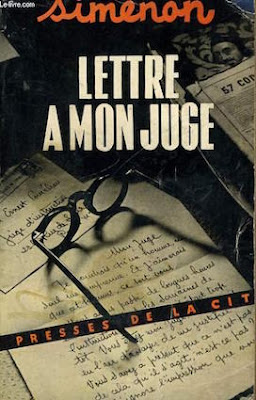 Act of Passion presents a unique letter written to the examining magistrate by Dr.Charles Alavoine after his conviction for the fatal strangulation of his mistress. His words expose an inhibited, frustrated man who exploded and disintegrated. Egotism, sexuality, and insanity provoked the end results. His egotism was and is rampant. The letter rambles on about wanting, without trying to “justify” himself, “just one man” to “understand.” Alavoine boasts of his “immense advantage over you [the magistrate] because “I killed.” Claiming he was “sort of a criminal by chance” but “a man who could not have acted otherwise,” he dismisses his trial as a “comedy” with “little relationship to reality.” Bizarrely, he counters the magistrate’s stated opinion—“I firmly believe […] his action was not premeditated”—with the confession that “I had difficulty with that.” He then announces, “I am persisting in order to prove I did act with premeditation in full knowledge of the facts.” He expects his exposition to be convincing since it is not “a letter from a madman” although it certainly is.
Alavoine’s sexuality was the catalyst for his downfall. Admitting to an “appetite for women. I do not mean for love, rather for women,” the man “haunted by desire” was conflicted: he “never saw a woman applying lipstick without thinking […] about the penis of an aroused male dog.” Intercourse with a pick-up brought him to tears “of happiness and despair all together” when he was 20, but only now does he realize he “has been searching” for a girl like that “for more than 20 years without knowing it.” He expanded his sexual misbehaviors under the noses of his mother and wife by having intercourse with their teenage maid every morning in the kitchen and molesting another teenage patient in his medical office. Yet he resisted intercourse with another teenage patient (for a few months only) because he preferred fantasizing about the act. This weird behavior continued until newcomer Martine captured and consumed him because not having sex with her was a “wrenching void.”
Alavoine’s insanity eventually took over, and the letter confirms his ongoing warped thinking: he was searching for his shadow—“Imagine the anguish of wandering about, all alone without a shadow, in a world where everyone else has theirs?” For a desire—“I was missing something and I did not know what.” For satisfaction—“I was hungry” but “hungry for what?” A future deranged answer is hinted at in his early odd fixation on Martine’s neck as “the principal human thing I discovered about her.” Perceiving a “bad Martine,” he felt a “heavy responsibility” to deliver her from her past and hence “took charge” to “purge her.” But jealousy interfered “ferociously.” After punching her with his clenched fist, intending to “release” the “real Martine before the bastards dirtied her,” the physical abuse escalated. Even more bizarre mentation followed the “miracle” of her achieving orgasm at last—“And to think one day I will have to kill you.” No sooner does he boast, “I had made her happy. […] I had cured her of her fears,” than he complains about his personal “ghosts” and “suffering.” So, bam, he strangled her. Two late declarations—“I killed her so she could live” and “I am not crazy”—offer a choice in deciding what to believe about the man in the end.