On the positive portrait of a woman, rising from the depths, heading for heaven 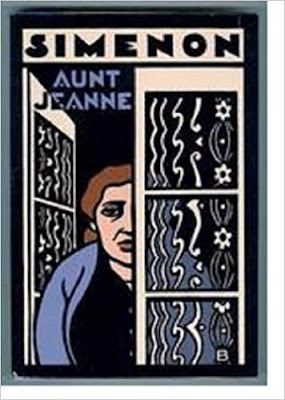 In Aunt Jeanne, after 40+ years in self-imposed exile, a 57-year-old physically and mentally deteriorating Jeanne Martineau returns to her family’s homestead to die. Upon entering the house, she finds her brother dead, hanging from a rope, and his adult survivors, all acting out and conflicting. Here’s the lineup—Sister-in-law Louise: “I am a bad woman.” Nephew Henri: “I am good for nothing.” Niece Madeleine: “I am perverted.” Niece-in-law Alice: “I am a bad mother.”
Despite being ill and worn-out, Jeanne notes everyone else must be as “fatigued” as she is and, sensing they need direction, she takes charge. “Her action was instinctive” and, like a mother bird, she takes them under her wing, establishing “order” within the household. Although extremely overweight with a failing heart and swollen legs, Jeanne puts on an apron and goes right to work on the myriad of domestic and family needs. In other words, she “assumed the leadership of the household,” and before long, whenever she puts on the apron, it had “already become her apron.” Recognizing she “had a role to play,” she takes the approach that “so long as everything is in order […] misfortune has been warded off.” Others see “a house of crazies,” but this is not what the perceptive, understanding returnee sees. Her approach importantly includes paying attention to the others and respecting them: “You are all men and women.”
As (bad) luck would have it, the family her brother left behind is bankrupt and has to leave the house, so the question for Jeanne becomes what to do? Her answer: “Persevere because I’m used to it.” Not only that, she interprets the necessary changes as “a godsend, if not to say, deliverance” for everyone. And, thanks to her efforts, the others actually are behaving better. Louise is stronger. Henri is motivated. Madeleine is relieved. Alice is motherly. And so, Jeanne projects that, in fact, “it will be a sort of cakewalk, a sort of picnic.”
Unfortunately, as the others improve, Jeanne deteriorates. Her “heavy and painful” legs swell more as her heart fails more (physically). Although confined to bed—“If she had taken a step, she would have fallen.”—she is more concerned is about “what is going on downstairs” within what is now the family. Faced with three options, being a burden on the others, going into a hospital, or committing suicide (like her brother), Jeanne chooses to get treatment first and then rejoin the family, a family of misfits to be sure, but her family after all. And off she goes….
In sum, heroic Jeanne finds the courage and strength to survive by recognizing she can help others see that they are worthwhile individuals who can overcome their misbehaviors. At the same time, her actions towards them relieve her feelings of guilt for her own prior and prominent misbehavior. Through tough love and attention, Jeanne succeeds in guiding Louise to potency, Henri maturity, Madeleine morality, and Alice maternity. Simenon has not only made Jeanne non-judgmental like Maigret, someone who accepts the guilty for what they are, victims in their own way, but the author has also made her a mender of destinies.