On a little known work recommended to first-timers and fans as well. 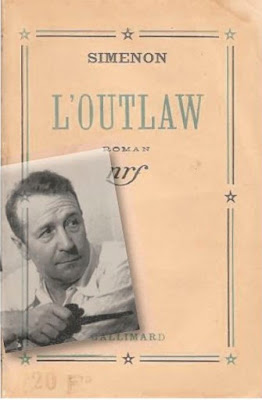 The more Simenon works I read, the more his skills as a writer become apparent. Working through the Maigret series opened my eyes, and sequencing now through the romans durs is enhancing this observation. Although not mentioned often in citing the author’s works, the grim tale in The Outlaw (1987 and L’outlaw 1941) is a good example of how he lures readers on. Hopelessness and inevitability are basic themes—one knows the ending will be bad, just not what it will be—but one will want to quickly get that answer.
Right off the bat, protagonist Stan is recognizable as a loser, but equally true, it’s not all his fault. He clearly is a victim, but at the same time someone who fails in most everything he does. To his eye, the deck always seems to be stacked against him.
With pervasive spatters of retellings and recollections (sometimes brief and disjointed enough to confuse), Simenon paints a portrait of a nasty, unlikeable character. We learn how, in his short life, Stan botches everything. As a contributor, he deteriorates from medical student to dental assistant to bellboy to beet puller. As a criminal, he escalates from petty thief to blackmailer to mugger to informer.
An illegal alien without papers, Stan wanders through Paris, penniless and homeless, until he dreams up a harebrained scheme to steal some money. That job bungled, he can’t find his girlfriend Nouchi, and so, in desperation, he latches on to a gang of brutal criminals. While they terrify him into doing their evil biddings, he conspires to cash in by exposing them. Suspecting he’s a traitor, they come after him until Nouchi rescues and protects him. Yet, this too is a no-win situation that propels him into even crazier actions.
In despair, Stan searches for ways out. He considers jumping into the Seine. “And if he threw himself into the water? Someone would save him! Someone would send him to the hospital. Unless they didn’t pay attention to him or arrived to late…” He contemplates killing somebody—anybody—just to get into prison with its rewards of warmth, food, sleep, and protection from the gang. He even ponders making Nouchi his target. Because she was a woman, he could plead a crime of passion. (At this point in time, the French looked upon a crime passionnel with great leniency.) Even if he doesn’t get acquitted of the homicide, at least he would be safe while being tried.
Despite all the atrocious things contemptible Stan does, Simenon is deft in making it impossible for us not to feel sorry for him. For instance, towards the end, pathetic Stan pitifully explains: “You [must] understand, Nouchi… I didn’t have parents, a community, any friends… I didn’t have a childhood... I had nothing…” In the end, he knows (and we know) “he was going to do something stupid, however he was incapable of not doing it!” He and Simenon do not let us down.
Enjoy!