SIMENON SIMENON. THE COUNTRY DOCTOR AND THE CITY COP

On how Little Doctor Dollent and Chief Inspector Maigret converge and diverge. 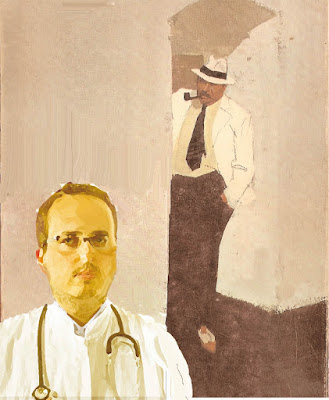 The captain of a luxury liner begs our Little Doctor to solve a crime and lets him name his own price. Even Anna, his ever-critical housekeeper, respects this commission. One will enjoy how Simenon gives us his version of a ‘locked room mystery’ in which a man is murdered aboard a quarantined cruise ship no one can board or leave. Popaul, a wealthy white commercial forester, has cruised from Africa to Bordeaux side by side with Victor Hugo, a black employee from the lowest class. (The chosen title Popaul and his Negro could have been Popaul and his Slave. Racial denigration is prominent in this story.)
Ostentatious Popaul throws a big party for all the passengers, only to suddenly rush off to his stateroom. Minutes later, a steward finds him, shot in the back, dead on the cabin floor, and Miss Ladilier, one of Popaul’s admirers despite her father’s warnings, is standing beside the body, gun in hand. Hugo is nowhere to be found. Once Dollent learns that Popaul had left Africa for good and taken his fortune with him, he projects the victim was guarding his wallet while his man was guarding the luggage. The wallet is missing and the suitcases contain no riches, so who has the money now? Our detective studies the passenger list and cockily predicts a solution in 24 hours.
Apprehended on the mainland, Hugo says he was in the cabin’s bathroom and came out to find his boss dead. In a panic, he jumped through a porthole and swam ashore. Believing this claim of innocence and deducing the lost wallet holds the key to the case, Dollent digs deeper. Suspecting premeditated murder rather than passionate manslaughter, the doctor/detective engineers a scheme that lures the killer out.
Not only does this tale involve more wrinkles and intrigues than the preceding seven cases in The Little Doctor collection, but it also expands Little Doctor Dollent’s character—inviting more comparisons with Chief Inspector Maigret. First of all, although Dollent drinks alcohol throughout the case, he is definitely not like Maigret since he specifically states: “I must say, Captain, I never drink… …except during my investigations, for then there is always one reason or another to swallow something.” Second, Dollent enjoys sitting in the liner’s lap of luxury, schmoozing with high society, sipping fine whiskey, smoking fancy cigars, and dining first-class whereas
Maigret never was and would never be comfortable in similar settings. Finally, the doctor/detective delights in the way he can gently and subtly “juggle people’s destinies.” Does this sound like our well-known “Mender of Destinies” or not?
David P Simmons
Pubblicato da Maurizio Testa a 01:38