SIMENON SIMENON. WHY DOES HE WRITE ABOUT POLISH CRIMINALS?

On Polish gang references that appear frequently in his works. 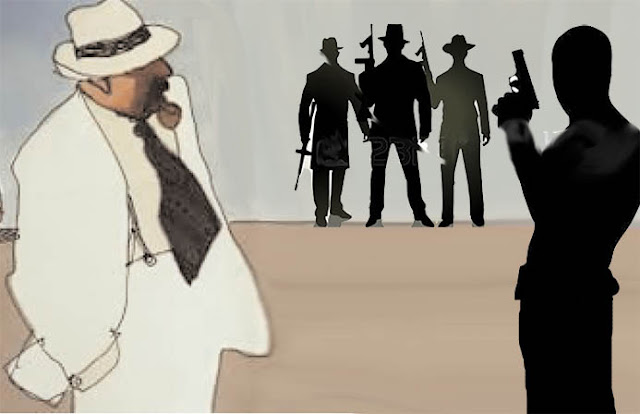 The Outlaw (reviewed recently on this blog site) deals with Polish Stan and a Polish gang. Anti-socials in cahoots and conflict, they are brutal criminals hell-bent on committing major atrocities for petty cash. References to Poles like this show up in other Simenon works. Indeed, the discovery of such Polish characters reincorporated here and there is yet another example of why I admire the Maigret series. I dub this trick ‘intermittent consistency’ and delight in running into these guys and one girl from time to time. It’s similar to the pleasure of reconnecting with Lognon, Janvier, and Lucas, who pop up in The Outlaw.
In response to questioning why Simenon picked Poles for this theme, my very good and informative friend, M. Google, told me a lot about a real-life Polish gang (variably called “la bande des Polonais” and “les bandits polonais”) operating in France during the 1920s. This notorious gang of many men and a single woman, all Poles, terrorized Paris and Northern France over the course of a few months. Multiple armed burglaries, which included 11 attempted murders with 5 successes, resulted in 21 convictions that broke down into 2 executions, 2 life imprisonments at hard labor, and 17 jail terms running from 4 to 10 years. The gang’s ruthless, horrendous exploits created a pervasive negative image for Poles throughout France: “People thought that, among criminals, Poles were a particular type, more dangerous than others, more difficult to control.” Thus, it seems likely the clever novelist Simenon saw an opportunity to pick up this ball and ran with it.
The documentation below, discovered mostly through Steve Trussel’s remarkable website, follows the chronology of the original French publications but uses the titles of the most recent English translations.
1931 Pietr the Latvian: This very first Maigret story introduces the ‘Polish’ theme. "The infamous Polish gang whose leaders ended up on the scaffold…”
1942 Maigret and the Spinster: A “Polish gang” with the same modus operandi one reads about in The Outlaw of 1941 is under Maigret’s surveillance.
1944 Stan the Killer: Polish criminals are central to this particular story. "A gang of Poles... …had attacked five farms… …they killed everyone… …including children."
1947 Maigret and the Surly Inspector: “A Pole, Stan the Killer, …had attacked a number of farms in the north of France… …shot down the two policemen outside, and had then shot himself.”
1948 Maigret and his Dead Man: "A few Poles were living in the area, [and] some people talked about a Polish gang."
1951 Maigret's Memoirs: “Maigret knew a Polish woman, who shared a hotel room… …with five men, whom she used to send out on robberies, rewarding those who were successful in her own fashion." And elsewhere, he is asked: “Well, Maigret, haven’t you arrested your Pole on Rue de Birague yet?”
1952 Maigret and the Gangsters: “A Pole who had for months terrorized the farms in the North and finally holed up in a little hotel in Paris, armed to the teeth."
1955 Maigret Sets a Trap: “M had been studying… …the Pole who operated among the farms in the Aisne Department."
Do you know of any other examples?