SIMENON SIMENON. A GAMUT FROM LOWLY CITROEN TO FANCY ROLLS

On cars in his books and in his life as well. 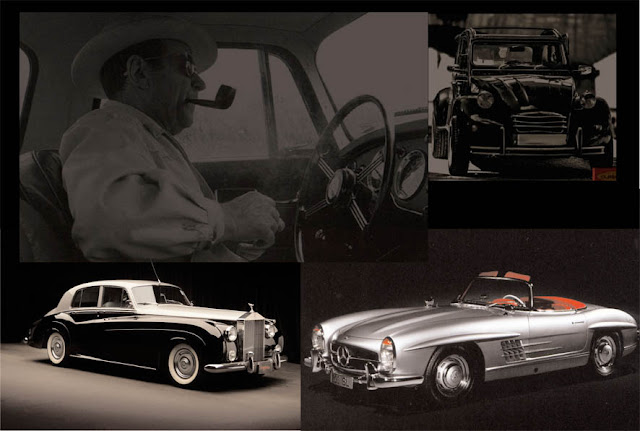 When Murielle Wenger recently (April 9) pointed out that Little Doctor Jean Dollent’s five-horsepower car was a Citroën rather than a Peugeot, it brought to mind some other interesting Simenon car stuff.
For starters, it’s fun to speculate about Simenon’s thinking when Maigret did not or, perhaps better stated, would not drive a car. As a young policeman, he used a bicycle and, as he moved up the ranks, he graduated to chauffeured police vehicles. He also used taxis, subways, buses, and trains to get around. Yet, when the Maigrets bought their own car (a Renault) so they could get to Meung-sur-Loire, Madame Maigret did all the driving. Certainly, there was more to this than simply not having a driver’s license.
Consider again something Murielle Wenger once wrote: “As everyone knows, Maigret never drives a car; he did try to learn, but…” She went on to offer three references in the series supporting the concept that Maigret was too easily distracted to be a safe driver. She made a good case, but I suggest there is more to it than that: it is fundamental to the couple’s relationship. A similar combination of servility on her part and need on his part is visible in the way she brings him coffee every morning and he expects it. To my eye, many other examples show up in their days and years together.
Be that as it may, equally delightful in musing about car matters is to discover that Simenon slams the door shut on the subject of Maigret’s driving, once and for all, in the very last work (#103) in the series. In Maigret and Monsieur Charles, the author emphatically states: “Maigret had never held the steering wheel of a car.” In contrast, Simenon himself was both a car driver and a car collector. For instance, while living in the United States in 1946, he bought two used cars, a Chevy and an Olds. With Georges and Tigy at the wheels, the Simenon entourage traveled the length of the Atlantic Coast in convoy, following Route 1 from Maine to Florida. He had numerous other cars over the years. Indeed, at times he had fleets of cars, and many of them were fancy. Rolls-Royces and at least one Ghia stand out. Simenon had a lot of chauffeurs, too, but so did Maigret—he just wasn’t paying for them.
Over time, Simenon’s attitude toward cars seems to have changed appreciably. After arriving in Paris at the end of 1922, according to Pierre Assouline’s biography Simenon, he talked about writing books the way Henry Ford produced cars: “I will make Fords for part of my life and will earn a lot of money. After that, I’ll make Rolls-Royces for my pleasure!” Much later on in life, when Simenon was living in Switzerland, Assouline’s Autodictionnaire Simenon quotes a 1981 interview with Bernard Pivot in which he said: “I almost felt ashamed when I was going through Lausanne in my Rolls…”
Do others have more Simenon car talk like this to share?