Is Maigret telegraphing what is going on in Simenon’s head? 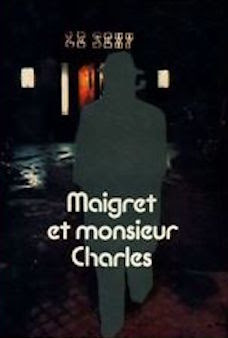 Simenon finished Maigret and Monsieur Charles on 2/11/1972. It turned out to be his last novel. A year later, Georges Simenon changed the occupational listing on his passport from “novelist” to “no profession.” Two days later, Simenon revealed why he “will no longer write” in a 24 Heures interview. Ten days later, Paris-Match quoted the novelist in this headline: “It’s over, I’m killing Maigret.”
Way back in a lengthy 1968 interview, Simenon had heavily emphasized the role his unconscious played whenever writing a novel.
So, I reread Maiget and Monsieur Charles to see if any unconscious elements therein foreshadowed his cessation of novel writing. Indeed, the story opens with Maigret contemplating his own approaching retirement: "He had just made a decision about the remainder of his career.” Perhaps Simenon was also contemplating retirement as a novelist. Offered a chance to be “the big boss,” Maigret becomes “gloomy” instead of feeling “joy.” In turning down this promotion―"he had, in a few minutes, made a decision about a future path”―Maigret is thinking that, soon, he will no longer be a cop. Perhaps Simenon was also thinking that, soon, he will no longer be a novelist.
Subsequently, the novel repeatedly hints both the policeman and the novelist are reaching the end of the line, providing uncanny support for the concept that, in sort of an unconscious creation, Maigret is/equals Simenon. What follows are some examples of how Maigret (you might read this as Simenon) seems unhappy with what he is currently doing and likely looking forward to retirement. It becomes clear this double man is physically and emotionally wearing down, making it hard to envision him continuing his work or wanting to continue it. “The majority [of neurotics and psychotics] made his life difficult.” A “winded” Maigret “grumbled” about how “they’ve modernized the premises, but had no thought of putting in an elevator.” This challenging lack of elevators threatens him twice more. When he walks to a meeting, he “regretted it” because “the journey seemed long” and “he wiped the sweat off his brow several times.” He fumes over “the hardship of submitting his expense account.” His behavior escalates into being all business, impatient, and demanding. “For the Chief Inspector, it was always an emergency.” Finally, he blames his “nightmares” and “an intense headache” on nonexistent “major physical efforts.”
Moreover, the novel’s writing style supports the idea that the novelist, like the policeman, is running out of gas. Atypically, there is a preponderance of non-contributory dialogue and multiple repetitions of particulars not worthy of serial emphasis. For example, one rehears and rehears how the dead man “disappeared from time to time for days at a time” and how Nathalie and Gérard became total “strangers.” These entries seem like lazy page fillers from the typewriter of a tired, disinterested novelist. When Simenon has Maigret offer his famously non-imbibing wife a midday glass of gin, this suggests a novelist who is giving up the ghost.
In short, I think, as Maigret ponders retirement―“at least, let him employ those three years as he sees fit”―the novelist is probably pondering retirement, too.