SIMENON SIMENON. A SWITCH IN STYLE 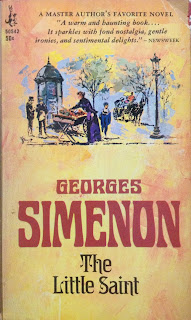 Although Simenon wrote The Little Saint in his typical time frame (nine days), his writing style is atypical. I visualize the author exercising his pencil (not his typewriter in this case), in a desire to showcase an ability to write a prose poem. This might explain why, as biographer Fenton Bressler attests, it was Simenon’s favorite book.
The writer’s descriptions of scenes, objects, and people are impressive. They are mostly light and bright. “The sun was aloft. The windowpanes were shining. The pinks were pinker, the reds redder, the blues bluer.” And “one got used to the new gas lighting, less intimate than the oil lamp. In place of a confined circle of light surrounded by a zone of shadows, the corners of the room greeted a white brightness….”
Yet, just as the text is lyrical, it is also crude at points. The Little Saint and the readers have to deal with pretty shocking sexual material that other roman durs and especially the Maigrets tend to present in more oblique and muted ways. An example is the described incestuous juvenile sexual assault with “a big carrot.” And, during the Little Saint’s physical for the military draft, the talk is frankly dirty. “He will yank on your balls and if he doesn’t like you, he’ll ram his finger up your ass.”
To be fair, when Simenon does juxtapose good and evil, the effect is often dramatic: The Little Saint’s mother lounges around nude and has intercourse in front of her children. Still, Gabrielle turns out to be, in fact, a pretty moral woman who does her best to care for and bring up her children properly.
Pubic hair―reddish, blond, and black―is at once colorful and threatening. For example, the latter black version destroys the Little Saint’s first foray into intercourse. Yet, his subsequent dreams, with their images of brown nipples ringed by pink areolae and long black hairs on belly and inner thighs, trigger his “very much more important” foray into the world of art.
Later on, the Little Saint’s first successful intercourse is almost romantic. “He wondered if he was not going to like it. The penetration was an experience he had not imagined in this way, very gentle, in which he felt well-being throughout his entire body.” The penetration sounds rather harsh, but it is not really surprising since Simenon likened his first sexual experience to a circumcision.
The Little Saint’s unwed pregnant teenage sister bluntly makes her little boy brother a sounding board as she contemplates an abortion. However, in response to her certainty that having a child would spoil her life, the incredulous Little Saint innocently asks, “Why would a child spoil your life?”
Another example stems from the Little Saint’s transference of his sexual desires from within his head onto his paintings. After imagining a depiction of nude soldiers parading through an Arc de Triomphe looming as a large vagina atop spread legs, the moral Little Saint hesitates at first, but overcomes his shame and paints the scene.
Isn’t odd that what is perhaps Simenon’s most poetic novel is perhaps his most explicit work?