SIMENON SIMENON. WAS THE LITTLE SAINT A SIMENON WANNABE?

On why Louis, the protagonist, is not Georges, the writer 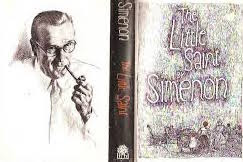 Some identify autobiographical elements in The Little Saint novel. Pierre Assouline, for example, links little Louis with little Georges when he states, “Things have come full circle.” However, in my view, the Little Saint is not Little Georges (or Older Georges) by at all. Their circumstances are strongly contrasting, and the two are more different than they are alike.
Here’s a listing: Louis grows up in a Paris neighborhood “where the basic concern everyday was to find something to eat and, for those with little ones, to nourish them,” but Georges grew up in Liège where survival was not a major concern. Importantly, Louis has five siblings and Georges had one.
Louis doesn’t even try to speculate about who his father might have been. The question to him that asks, “Do you know what country your father is from?” gets a simple, sad, but unequivocal response: “I don’t have one.” In contrast, Georges had a father in their home for 18 years.
Louis and his mother love one another unconditionally. Even though he stops living with his mother eventually, the “umbilical cord had never been broken.” People call him the Little Saint as much for this filial devotion as his tendency to turn the other cheek to others. In contrast, Georges and his mother hated one another unrelentingly. This difference in mother-son bonding effectively destroys autobiographical linkage between Georges and Louis to my mind.
And there are more differences: young Louis regularly watches open sexual promiscuity that young Georges never witnessed. The first opportunity for sexual intercourse seems akin for both, but their reactions are opposites: Georges participates and Louis flees. Georges switched schools promptly just to be with that first girl because he was so eager to do it again, but Louis “would not try that again for a long time because he was afraid of discovering he was impotent.” The grown-up Louis “often had women around him,” but he connects primarily with his mother and never marries―in total contrast to the man of “10,000” women and two marriages.
Both quit school to work, but Georges moved directly and permanently to writing whereas Louis slowly climbs up the journeyman rungs in a wholesale market until, much later on, he suddenly jumps into building himself into a ‘self-employed’ artist. One follows Louis into his 70s, but his life is never what Simenon’s was into his 80s. Louis lived in just three places in just one country, but Georges’ residences numbered in the 30s in five countries. Louis ultimately sells enough paintings to be “not poor, nor rich” whereas Georges rapidly became way more than rich.
According to his report, Simenon did want to be a homeless person. “My true temptation […] was to end up homeless.” So, this may have autobiographically spawned the Little Saint. At least, the author does have his character live on the edge of homelessness and eat out of trashcans for a while. Nevertheless, that afore-mentioned overriding difference, which separates the two men from birth on, persists to the end: Louis always has the mother Georges could only have wished for.