On a rare thing: a happy character in a "roman dur" 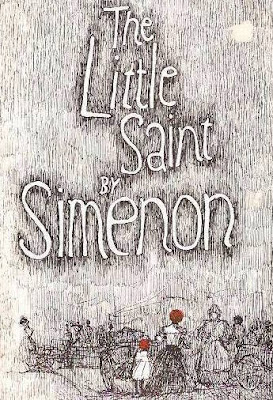 Of the dozens of romans durs I’ve read, The Little Saint is particularly striking. It is not like the rest of the ‘genre’ at all. It’s not a tragic disaster; it’s a ‘realistic’ fairy tale. The novel presents life among the poor in Paris after the turn of the nineteenth century with realism reminiscent of Zola, but it narrates the Little Saint’s life as an optimistic ascension rather than a depressing decline. And protagonist Louis Cuchas is one of the few happy people I’ve run across in the romans durs so far.
The proof of his happiness shows constantly in his “sweet” smile of “Saint Médard, whose church stands at the end of his street,” an early description foreshadowing his lifelong nickname. Louis is, indeed, very small. “I am the smallest.” And Simenon has the Little Saint retain this smallness―and happiness―for a lifetime.“Being of a deferent and polite temperament,” Louis is passive and placid. “If he was always so calm, with a serene smile, it’s perhaps because he didn’t ask himself questions.” In fact, “I don’t know” persists as his customary response to questions from others. He’s intelligent, so he does well in school even though he doesn’t pay much attention because he’s busy daydreaming and drawing. The little boy doesn’t play; he just watches. “He lets the world come to him, little by little, piece by piece.” Other kids push him down and slap him around, but he turns the other cheek. Since “he takes himself for a little saint” in their eyes, they dub him the Little Saint. His lifelong filial devotion to his mother reinforces this concept. Since he arises early before school to push her produce cart to the wholesale market, the workers there recognize him as “a miniature” and “a saint.” Observing its bustling environment “exhilarates” him so much, he quits school to work there as a clerk.
After developing little boy Louis superbly, Simenon does not change his stature or comportment as he matures into adulthood. Because “he hadn’t found […] anything that wasn’t worth looking at with interest,” Louis constantly absorbs images of objects, people, and happenings around him, whether ordinary or exceptional. “He went from discovery to discovery, but […] he didn’t strive to understand. It sufficed him to contemplate a fly on the plaster wall or water drops rolling down the windowpane.” In time, Louis intuitively switches from passive observation of life to active depiction of it as an artist. Calling his works “colors” rather than “paintings,” the self-taught painter uses “the most brilliant” colors. In the same way, Simenon paints a “radiant” Louis. Pierre Assouline agrees: “One will never find a more radiant character under his pen.” With the Little Saint manifesting passion for the first time through his artwork, Simenon shifts to encapsulating the simple, serene existence he leads for the rest of his life. “As much a dreamer as in the past,” he continues as a real loner, who doesn’t mingle or talk much, but he does have “three cats” and “often had a woman with him.” His art makes money, but he lives in his small studio and wears the same outfit year after year and, of course, he always wears his “satisfied smile.” Indeed, when asked at 70 years of age what image the Little Saint has of himself, the still happy man replies: “That of a little boy.”